And not in a good way...
I mean that they are spreading themselves way too thin and relying too much on variants/repaints.
MK3 Scorpion and Sub-Zero... fine... Modern "Klassic" Scorpion and Sub-Zero... Dude, where's Liu Kang, Kitana, Mileena, and Johnny Cage that you teased? SCREW MOTARO!! We haven't received a game's full roster and we're doing more Scorpion and Sub-Zero variants?
Let's take original MK:
Characters in red have not been made:
Kano
Liu Kang
Raiden
Johnny Cage
Scorpion
Sub-Zero
Sonya
Reptile
Goro
Shang Tsung
As you can see, we're halfway there.
Don't get me started on SFV, USFII, Tekken, KoF, Golden Axe, Streets of Rage, Injustice, Gatchaman, Darkstalkers, Samurai Showdown, World Heroes...
They are getting far too many licenses and rosters are not even complete. Worse, they are starting to cut corners on accessories. 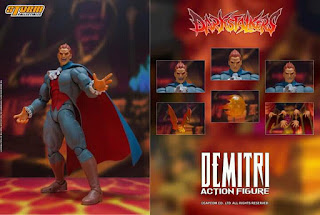 Demitri lacks the Demon Cradle wings. He even lacks the aura that swirls around him.
I'm not asking for the full vampire mode Demitri, which we should get some time, or for the Midnight Bliss rose and a husk absorbed body.
This worries me because classic iconic moves are being left out. Hell, even E. Honda lacks his iconic Hundred Hand slap.
What will they do with Donovan, Hsienko, Huitzil, Victor, and other characters that have "assistants" like Anita, Cecil, Emily, Mei-Ling, Le Malta... etc?
Posted by Nefty at 3:39 AM No comments:

Been thinking  about the Teenage Mutant Ninja Turtles ultimate figures. Remember when NECA made the coming out of their shells variance for last Comic-Con?  my suggestion is something along those lines:

Basically reissues of the turtles with different weapons and head. In Raphael's case maybe a new back shell with a removable piece for the breakfighting spinner to plug in.

As an added bonus, add the vanilla weapons in wacky action colors:

Lime green chucks for Michelangelo
Blue Sai for Raphael
Orange swords for Leo
Cyan Bo for Donatello.
These aren't "Mandatory to own" but they are a nice addition. Also it kinda allows S7 to "rerelease" a close to "vanilla" versions of the turtles. I had thought of the Storage Shell versions but recreating the storage shell would limit articulation. Also, their accessories aren't that great.
Same thing with the headdroppin' turtles.
I had thought of the "Toon variants" but they practically required 100% new sculpts, because they look pudgier than the normal Turtles.
The other possibility was "Movie Star" Turtles. I'm more than aware of NECA's screen accurate turtles, but Playmates did release vintage toys of the movie version and what I'm thinking is that they base the set on the vintage toys instead of the actual movie turtles. Basically it would be new belt and head with a more detailed paint job on the toys.
While movie styled ultimate Turtles would be cool, because they would look great with Thundercats and He-Man; I'd prefer the wacky action over all others.
This is not official it's just some speculation on my part.