That's the Trailer. Pretty cool huh? Super Smash Brothers style Gameplay, Teenage Mutant Ninja Turtles. The 25 th Anniversary of TMNT is this year so, this game is going to be Awesome!! It even features the old logo, so there might be a chance for Old Toon favorites to show up...

What the Hell is this!? Since when are the Rabbids TMNT Characters!? We get three different Rabbids on the Wii Version. (PS2 owners get the Rabbid, Fugitoid, extra stages Free Version. In other words; the short end of the stick.)
-"So what's the Roster? I can deal with 3 Rabbids, This has to have a huge roster isnce SSBBrawl had a lot of fighters."
The Four Turtles, Splinter, Shredder, April are obviously in here. There's Casey Jones, Karai, The Fugitoid (Not on PS2), a Foot Ninja, An Utrominator (Basically a fighting Utrom. Not to be confused with Krang) and the Rabbids (who are not on the PS2)


-"You must be forgetting someone... Rocksteady, Bebop, Rat King, Leatherhead, Baxter Stockman, A Triceraton, Tokka, Rhazar, Slash, Tatsu, Hun... Krang?"
Nope! That's pretty much it... except for Night Watcher...
-"You must be joking... Night Watcher must be a second skin for Raphael..."
Nope! Raphael AND his vigilante Persona are Two Different characters...
-"Ok I get it the roster is not that great... How about Gameplay?"
Well As you can see in the Rabbid Video, the gameplay is Kinda like Smash Brothers. Well it should be similar since part of the SSBBrawl Team worked on the game with Members of Team Ninja As in the people behind Ninja Gaiden and Dead or Alive... Smash Brothers and DOA... The gameplay must be awesome! Right?
-"It isn't right?"
Well... The controls are a bit unresponsive on the PS2 version or when you don't use the nunchuck on Wii.
~The characters ignore the turning or jumping commands at times.
~At times the game can't sense the difference between tapping forward and attack from holding forward and attack.
~The characters are unable to crouch.
~The random items on the field can only be used on the ground.
~Some stages have Gator deathtraps (which can't be turned off on the options screen.)
~The A.I. has an uncanny ability to dodge attacks while downed. The player on the other hand has more chances to get hit.

Now for the good:
~You can swap power ups if you use the pointer function. It also can be used on a Rabbid Stage (That strangely enough made it on the PS2, yet the Technodrome is MIA)


~TAG TEAM! Now there is something new and refreshing on this SSB clone. Casey and Raph vs. the Foot, Shredder and Karai vs the Turtles, any team vs two Rabbids. Tag throws are nice. Grab and Tag for the win!
~Grab/weapon clash struggles. These add more tension to the brawl. They give you a chance to avoid being thrown.
~Wall running and jumping. It's not as fluid as the Prince of Persia, but it's something different.

-"So you're saying it's bad."
It has it's flaws. They outweigh the pros, but once you get used to it it's not that bad... Ok the unresponsiveness I cannot stand... everything else I can tolerate. If you use the Wiimote or can get past the occasionally unresponsive controls, then it's ok.

-" How about the game modes?"
Well, there's an Arcade mode... No need to explain this. There's the Battle Royale mode which is fancy wording for VS. There's also theMission mode, which is similar to the SSB chanllenges. On Wii there are some mini games (which again the PS2 didn't get), Tournament, Swap Out and Survival Mode. (Beat the shell out of 100 opponents.)

Arcade mode you just play the game's story with the Turtles, Splinter, Casey and April... (NO NIGHT WATCHER...) You get some cutscenes... Think of The Watchmen Motion Comic but with Mirage Artwork... and btter voice acting.
There is little to do in the single player modes. The fun is in the multiplayer modes, but the small roster and somewhat unresponsive controls will need some hardcore TMNT fans semi-inebriated in order to play this game to the fullest. (Note that I do not condone drinking and driving. It's illegal and people could get hurt or dead. Also underage drinking is illegal.)

Now for the scores:
Graphics: Nothing out of the ordinary here, but nothing remarkable so it gets a 7.0
Sound: The music is bland and barely noticeable. The voice acting is good since they use the 2k3 cast. That means that April kinda sounds like Ash Ketchum from Pokémon and Mikey has the same annoying voice as the 2k3 toon and the previous 2k3 Konami Games... (EAT FEET!! EAT FEET!! EAT FEET!! soundbyte nightmare...) 7.0
Gameplay: As I discussed before, the bad outweighs the good, but having unresponsive controls in a fighting game is unforgivable (even if it's just at times) 4.0 (PS2) 6.0 (Wii)
Fun Factor: This game is a bit too bare bones to be a full release. At times it feels like a very advanced Beta. Once you beat the game with all the characters there is little else to do. (Beating Survival Mode with Karai and Foot ninja to unlock Their Costumes) Everything else seems to be unlocked by codes.
If you're desperate for an SSB type of game then get SSB Brawl. If you love the TMNT then get the Wii Version. If you don't care for Fugitoid, the Rabbids, or don't have a Wii, then Get the PS2 Version, or rent it first... 4.0 (PS2) 5.0 (Wii)
Total Scores: 5.5 (PS2) 6.25 (Wii)
-"The PS2 version is cheaper!"
But the PS2 Version is more incomplete than the Wii Version.

Don't be blinded by nostalgia. This game is pretty much 2k7 movie version of Tournament Fighters Super Smash Brothers style... with some 2k3 elements thrown in.
It does not cover the Entire TMNT Universe and does not Shellebrate the 25 years of TMNT. (More like a brawl 2-5 years in the making.)
To rub it in TMNT Fans faces the Old Toon TMNT (or OT Colored 2k7 TMNT appear on the Ubisoft Logo)
On other TMNT Related news, Playmates (The company that has made the TMNT Toys since the 80s with the exception of the Mirage Comic style figs by NECA) will release a Comic Style Turtles Line. (it reeked a bit of jealousy towards NECA and the TMNT, but since we're getting Splinter. I don't mind.) 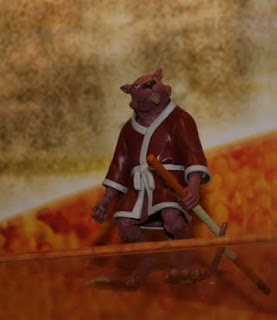 He taught the Turtles to be Ninja Teens. He's a Radical rat, yeah!

Well He was Cancelled along with any other non Turtle character.
http://gogreenmachine.org/
Looks like I'll have to get a 25th Splinter to have a Radical Rat teaching the turtles...

Once again I hate being a Turtle Fan! The only Redeeming fact would be good news from the Elusive Turtles Forever Project. You can read about it and see a video at Ninja-Pizza

I am an action Figure Collector. Not a Mint on Card collector, because I like to take the suckers out and set them up in Dynamic Poses. Every now and then I happen to get a defective toy. It happens. I hate it when it happens, especially when the fig is one of the harder to find figs.

There are Four kinds of defects:
-Loose or mega stiff joints. These are one of the most common and range from mild looseness or Stiffness (Easily fixed) to extreme looseness or Stiffness. (The latter could cause breakage.) Toy Biz's Scorpion from the Spider-Man Classics line and Mad Jack (Jack O' Lantern) from said line suffered from the prone to breakage ultra stiffness. (I went through 3 Scorpions.)
Splotchy and messed up paint jobs. These are easiliy avoided when you shop on brick and mortar stores. The problem is when some of the figures have logos or insignias with smudges. Pretty minor, but easily avoided uless you're buying online. 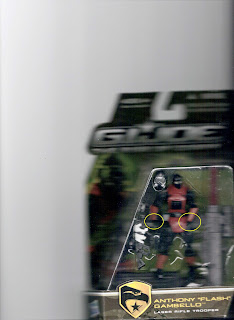 The two yellow Circles show that Sgt. Flash has no hands. This Sgt. Flash was bought at the same Wal*Mart that had the headless Destro. (I didn't notice the lack of hands... until I got home.)

-Misspackaged figs: This one is a bit iffy. There are true accidents in the factories in which they place the wrong card/info on a figure, but there is an evil breed of collectors the "repackagers" a different breed of evil than the "scalper". These "repackagers" buy figs and then return the toys but there is a surprise. (I still do not know how they do it.) You see that nifty GI JOE: The Rise of Cobra Paris Pursuit Snake Eyes cardback. It is now housing a 25th Anniversary Cobra Officer with GI JOE tRoC Duke's Weapons. That could not be a Factory error since the GI JOE 25th Anniversary line is over thanks to The Rise of Cobra. 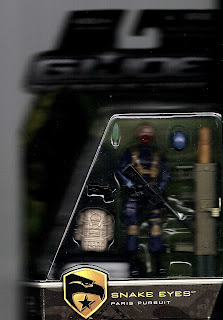 If that is Snake Eyes, then The Jonas Brothers are the best band ever...

- Broken figs. I don't mean the ones that accidentaly break with use. I mean figs that are BROKEN INSIDE THEIR PACKAGE. (Or seemingly ok figures that break off on their own.) Unlike the super stiff/or super loose figures these gusy make me angry. Especially when it's a hard to find figure. Like say Mattel's DC Universe Classics line. That line is infamous for being hard to find and the Exploding Butts of some figures. 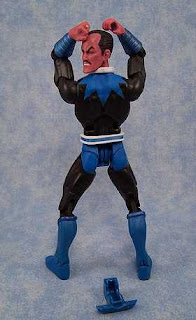 Either Siniestro had a really great night, or he ate one too many extra bean and chili burrito.

Toy collecting is not easy. As you can see we have to deal with these flaws. We also have to deal with the "scalpers". What is a "scalper"?
A Scalper by definition is a person who scalps.
Scalp: to buy and sell so as to make small quick profits
Posted by Nefty at 2:13 PM No comments: