It came from the Toy Chest: Remember him... as Cedric Diggory

I must be a masochistic lion... I mean collector. Aside from dealing with the mattycollector.com hassle every month, now I'm gonna review a product from its sister site, Barbiecollector.com (No, I did not bought it from the site... I got it at Wal-Mart... The megastore that does not stock their own Exclusive toys...) 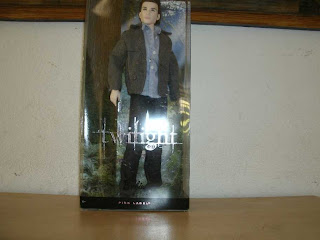 Here is Edward Cullen: The Doll in all of his glory. He is a Pink Label Barbie; in other words the lowest level of collectible, but slightly above the average Barbie doll. As you can see he looks really good inside his package. I kinda regret opening him cause now I can't put him inside the package... (Dolls and their security restraints to keep them in package... GRRR!) 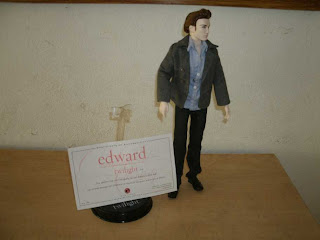 Now I'll show you what he's got:
He has a nice stand, not that he needs it since he is really stable. A Certificate of Authenticity, and his clothes. They are removable but I'm not going to remove them... for a couple of reasons:
1) they're partially sewn to each other to keep them in place (don't want to mess with that)
2)why the hell do I want a naked Rob Pattinson doll!? 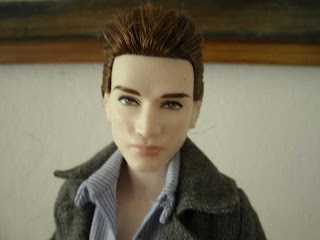 Yes, he does Sparkle. Not sure if it's on the whole body or only where its visible since I'm not going to take off his clothes. 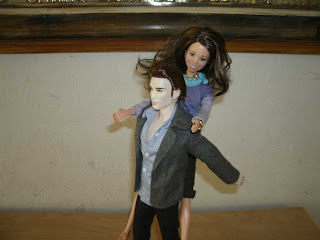 His Articulation is extremely limited, since he's a higher end "collectible Barbie". (Even if he's in Pink Label) He has a great range of motion on his head (almost like a ball joint.) His shoulders have a ball-joint like articulation and his crotch only swivels from standing to a sort of This IS SPARTA kick.
No, That is not Bella. She does not smell of strawberries or whatever Bella smelled like. This one smells of cheap wigs, moonshine and a little bit of Achy Breaky stuff. 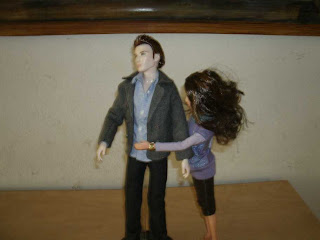 Now for Eddikinz score: As always, 1 = so crappy that the End fight of Breaking Dawn seems awesome compared to it. and 5 makes Eclipse's fighting scenes look like Super Mario Brothers.
Articulation: 3
For a doll he is slightly under articulated, but then again this doll is meant as a display piece and not a playable one.
Sculpt/paint: 4
There is not much to say here since the body is basically the Ken body, but with Meyerpire details added to it. (The glitter for the sparkle effect.) There is no slop on him since he's a "higher end collectible" Also Mattel has a higher QC standard on Barbie dolls.
Accessories: 3
He really does not need anything, but the stand is a nice touch. (He does not need it though, but its cool nonetheless) He has his clothes which are removable, if you dare cut off the ties that bind the clothes together.
Overall: 3.33
If you must have him keep him unopened. If you must have the Twi-dolls here's a small checklist:
Edward (Twilight)... Duh!
Bella (Twilight)
Jacob (New Moon)
Alice (Eclipse)
Victoria (Eclipse)
Seriously? No Jasper, Rosalie, Emmett, Carlisle, Esme, or James, Laurent, Jane, the rest of the Volturi or at least Tyler's Van... 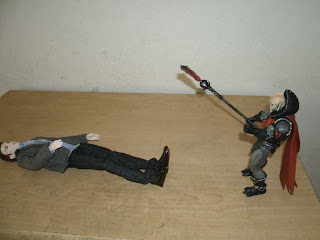 Hordak: AVADA KEDAVRA!!!
I guess that Hek-Tor does not like Twilight...
BTW: Count Marzo is coming...
Posted by Nefty at 8:34 PM