Who is this Illumina and what does she do?
Illumina was a character made for the 200X Comics by MVCreations 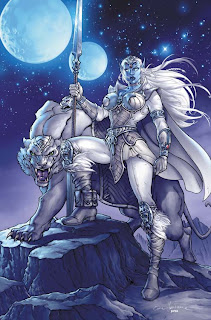 Illumina is the Blue Lady in the Picture... I don't know the Cat's name...
This is all the Info I could find regarding her:

Little is known about the blue-skinned warrior named Illumina. It is known, however, that she is a descendant of the Gar refugees that came to Eternia after the destruction of Infinitia and that she was a member of the Guardians of Grayskull (a secret sect devoted to the preservation of Castle Grayskull’s secrets throughout time).

At one point in her life, Illumina was known as one of the strongest proponents of anti-Eternian sentiments amongst her fellow Gar. Accordingly, she was a fierce proponent against efforts to integrate the Eternian and Gar peoples. What remains unknown, however, is what (if any) role Illumina had in the ruination of Captain Miro’s planned union with the mother of Keldor and the subsequent Gar massacre instigated by Count Marzo and other segregationists. Whatever the cause, with age Illumina’s views changed and she eventually sought atonement and repentance past for misdeeds.

At the time when the Mystic Wall was created she was on the Dark Hemisphere of Eternia, which effectively trapped her there. Fortunately, in addition to being a great strategist and possessing formidable fighting skills (especially with melee weapons), she has the power to control light and can even blind her opponents when those other talents are not enough. Prior to being caught on Dark Hemisphere she assisted Dekker in the teaching of Duncan.

Although a heroic force, it has been said that she was very cold blooded. Also, a common misconception is that she is in some way related to Keldor; however, beyond their shared Gar heritage there is no connection between them. Similarly, many believe her mount to be a descendant of the Battle Cats of old, while, in fact, her white-furred companion is an entirely different species that is genetically closer to the blood-thirsty Panthor.

That's pretty much all the info I have on her. She's from Keldor's race, the Gar, but she's not a relative of the fallen Prince of Eternia... (who later became the OVERLORD OF EVIL! *Gasp Spoilers!*) She has light manipulation powers... (Probably that's why her name is Illumina) Her ride is an Albino Panthor, and she trained MAA.
Now why am I talking about her? Oh yeah! Mattel... Just as I did with Josh, I'm doing the same with Illumina. Why? Simple: This is the only Obscure character that Mattel has been tossing Hurdles to stop her from getting made. Kinda Like Donkey Kong...

Where were the "demands" for 5000 Customers for The Green Goddess, Vikor, Gygor, Demo-Man, or any other Obscure character (Concepts, Prototypes, etc.)?
What's with the:

We certainly can get to her one day, but do fans really want her to bump another figure like Ram Man, Frosta, Flogg, or even Dragstor?

Putting her against a heavily anticipated core character seems like a fair choice...
Now the thing that grinds my gears is the following: It takes 5000 to be slightly more than a "Vocal Minority" but it takes 1 to be the Majority!? WTF!?
Did 5000+ people ACTUALLY Requested Vikor, Demo-Man, or Gygor? Methinks something Fishy is going on here...

Compared to Ram Man who would require ALmost 100% new Tooling, Illumina seems like an easy choice to make for a budget balancing "filler spot"
From a Tooling Standpoint, she could reuse a LOT of Parts! (So would her Cat...)
If we throw Illumina through the Infamous Classicizer Machine She'd only need 3-4 New Pieces:
Head
Dress (2 Pieces, IF they use the new Female Body)
Weapon
Her Cat would need about 2-3 New Pieces:
Head (If they don't reuse Panthor's)
Saddle
Thing on its Forehead

Logistics would not stop her from getting made... Vikor had a LOT of new parts tooled compared to what Illumina would need (New torso, head, right Bicep both arms, Loincloth, both boots, cape, Sword, Shield, Ax...) yet he looks like he shares a lot of parts with the other figures.

Is her Story too convoluted for her to fix in MOTUC Canon? Like I said on the Josh Awareness post, Mattel can make whatever story they want with Illumina... They made Gygor into an evil Ape that Evil Lyn released. They split Zodak and Zodac into two characters. King Grayskull and He-Ro worked together... although they're a bit redundant, since BOTH Were the Power Source for He-Man... but you get the idea... If Illumina's original Story is too complicated they could "fix it" cause her one appearance was a page in a comic... (as far as I know...)

If Logistics is not the issue, canon is another non-issue, the popularity issue is not a real issue, cause we've gotten characters AS obscure or more obscure than her made. Then WHAT IS THE ISSUE!?
Does Toyguru HATE Illumina? Does he have a Beef with the people behind her creation?
Honestly, I have NO IDEA, but the Question would LOVE to dig deeper on why Mattel is so hellbent in stopping Illumina from Happening! Sadly I'm not the Question... so I'm staying in the dark. Hopefully Mattel's MOTUC team would reconsider their stance on Illumina before skipping her for the Wind Raider Pilot from a Model Kit Box art... (No offense to fans of the Blue Pilot, but that guy is so obscure that he doesn't have a name or a backstory...)


Why do I want Illumina?
Look at her: She's got this Elven Warrior vibe to her, she Rides an Albino Panthor for crying outloud. We have, robots, bee men, moss men, mer-men, cat men, ninjas, cowboys, giants, Firefighting Elephant Cyborgs, Lemon-Lime Apes, Time Travellers that look like a Rob Liefeld creation, why can't we have a female Elf-looking Warrior?


If you want to join the campaign of 5000 for Illumina you can check out Facebook's Illumina group! Please, don't let this cool looking character be lost due to the ridiculously difficult goal set by the Toyguru.
Posted by Nefty at 7:06 PM