It came from the Toy Chest: Another Titan... GO!

Well, here's my next figure from that random raid at Marshalls... Raven!

OK this one is more acceptable! DC's Raven is the figure I'm going to review, but you already knew that...
One thing that bugged me is that she came in the Validus wave instead of the Trigon wave... It would've made more sense to have Raven and Trigon in the same wave... I think I should get on with the review part: As always 1= crap, 5= good!

Articulation:
At first look Raven has the same Articulation as a standard DCUC. For some reason her ab crunch seems very limited. She has abnormally tight elbows. Noticed her right leg has the "Frozen joint" syndrome that plagues the DCUC...
4.0 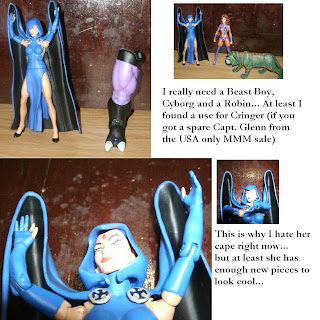 Paint and Sculpt:
This is the confusing part: While the DCUC use the "buck system" (so they can reuse parts), Raven has a LOT of new parts. Some work, others, not so much.
Her skirt works like a MOTUC Loincloth, but with really soft plastic.
Her hood is sculpted in a way that it looks like it's a part of the cape in many angles... (does not look like Skeletor's bonnet)
Her hands even have her rings sculpted. (paint's a bit sloppy there)
Now the first piece that bugs me is the Torso piece. It looks like it was made for Starfire... (who is supposed to have a huge gap of naked flesh to show cleavage, yet the toy has the "uniboob" buck for well covered chests...) Raven looks like she painted her dress...
The other piece that bugs me is her cape. I know that in the comics it flares up like that to give her that "Raven Wings" look, but in plastic it looks off!
The paint is OK on the figure, aside the bits of slop on her rings.
3.5
Accessories: Just the Validus leg, and a Pin... 3.0 (2.0 comes just for the pin...)
Overall she gets a 3.5 I blame the lack of character specific accessories and the few sculpt issues. At least her QC is not as AWFUL as the Martian Manhunter.
Posted by Nefty at 10:55 AM