It came from the Toy Chest: Raiding the Eternian Winds

The very first Masters of the Universe Classics Vehicle Review for:
The Wind Raider. I should start by saying thanks to the folks at The Great Rebellion for the Wind Raider... This is my first Wind Raider EVER!! so, that makes the review a bit harder for me... Can't stop playing with the sucker... 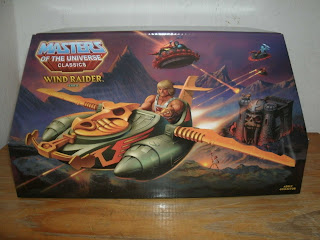 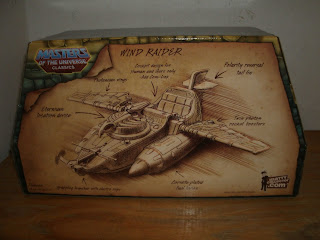 The Artwork for the Wind Raider was made by Artist Rudy Obrero, who worked on some of the 80s Masters of the Universe Artwork... Smart move by Mattel...
To start off, check out the Puny box it comes in... Now, don't be deceived by the small box... This thing is huge once you assemble it... Honestly, that box is packed to the brim with Wind Raider goodness! but before opening it up, check out that awesome art... Brings back that Vintage Masters of the Universe feeling... If only the rest of the toyline had that Vintage feeling with the red meteor and the blue background... but that's a story for another day.
OK after assembly, this vehicle is HUGE! I'd say bigger than Swiftwind... And this is just the Toy based One-Seater version... Now imagine if Mattel had made the Filmation FOUR-Seater version of the Wind Raider... 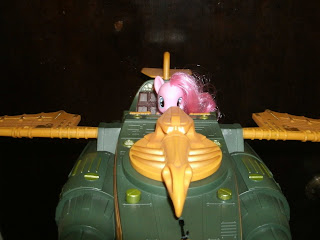 Pinkie Pie is Riding the Wind Raider: Where is your god now?
Well, what can I say about it... NO STICKERS!! I hate having to put stickers on toys... (Especially if they already have HALF the Stickers on...)
The wings have some articulation (They can rotate and may help for some poses.) The rudder on the back also can move. It has hatches on the turbines that you can open (for displays with MAA doing the whole Duncan is a Mechanic/Inventor/Weapons Master thing he does) The anchor on the Raider is Fireable by pushing one button disguised as a giant rivet. The Hood-Ornament looking thing is how you retract the short rope.
The Wind Raider also comes with a stand. Obviously, you pose the wind Raider on it... It helps create the illusion that it is flying or hovering. It's about One MOTUC Figure Tall (OK if you decapitate the figure and removed it's neck) The stand has the capacity of tilting (cause the peg you put the WR on can tilt.) Depending on how you put the Raider it will depend to the direction it will tilt... I could see this stand being reused for the possible Roton... The guys on the WR box... for those who don't remember the Roton...

Now here's a video look at the Wind Raider...


Now with that said and viewed: Here's the scorecard for the Wind Raider:
Articulation:
The Wheels rotate, the wings do too. The rudder swivels and the hood ornament thingie spins around. For a static piece it has a lot of articulation. The only minor gripe I have is that the wings do not have an option for spinning/being posed independently.
5.0
Paint and Sculpt:
As mentioned above, the stickers of vintage times are decals now, so be careful with the WR cause they may scratch off. There's no huge slops on mine, so I'm happy with the paint. Sculpt-wise, the 4Horsemen did their stuff by bringign 3-D details to what were stickers in the past.
5.0

Accessories:
The Stand... Which was not expected, but is an excellent addition that improves the Wind Raider...
5.0

Action Features/Playability:
Well, we know that it can fire off the anchor and it can retrieve it. It has wheels so "the kids" can roll it around the floor and play MOTUC Bowling... (Don't cheat, pop-off the wings before playing MOTUC Bowling)
5.0
Overall:
5.0 it's an amazing vehicle that manages to showcase the sculpting magic of the Four Horsemen in a way that the customers are not used to seeing... I mean they made a vehicle that I wasn't too into it as a kid into an amazing thing! (If they'd make a DRAGON WALKER!! I'd faint!) 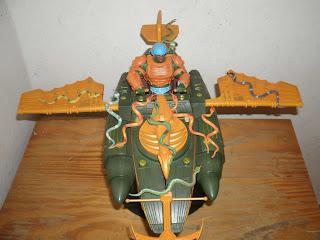 As hard as I tried I could NOT avoid making a Snakes on a Plane joke...
Posted by Nefty at 5:08 PM