Do We REALLY NEED Playsets in MOTUC?

Looking at Masters of the Universe Classics we've got the figures, Beasts and now Vehicles with the Wind Raider. The Next Step is rather Obvious, Playsets. When they're mentioned Grayskull is the first thing that comes to mind. But I'm not here to talk about Which Playset I'd like to see in Masters of the Universe Classics. The real question is: Do we REALLY NEED Playsets in MotU:C?
Before all of you start grabbing your pitforks and form an angry mob, hear me out!
I'm NOT Against getting Castle Grayskull, Snake Mountain, The Fright Zone, The Crystal Castle, and the other important background places that were Playsets in a "previous toyline."
What I mean by "Do we need Playsets?" is do we need all the bells and whistles like working elevators, voice changers, electronic lights and sounds, slime dumping, firing missiles, etc. for what will pretty much be a bunch of underscaled, glorified backdrop pieces.
Sure, some collectors are buying MOTUC Figures for themselves and their kids to spread the MOTU Love, but we already ARE Missing stuff that made these guys fun when we WERE Kids!
Battle Armors don't have their funky Battle Damage drums, Sy-Klone doesn't spin around, Hurrican Hordak's weapons are very static, Thunder Punch He-Man's punches lack "Thunder", Kobra Khan can't spit and Leech doesn't suck, etc.
Since the line is an "Adult Collector" Line, then why not go the "Adult Collector" way and Make MOTUC Grayskull a True Backdrop and when the Eventual He-Man Movie DOES come, make the Movie Grayskull MOTUC Compatible or that you can Snap on the MOTUC Grayskull on the Front Facade of the Movie Castle.
Now, How big should these backdrop/playsets be?
The 200X Grayskull is roughly 20 inches tall. So, in theory a MOTUC Castle should at least be 24 inches tall, from bottom to highest point on the Turrets. So, you'd need about 30 inches of clearance on the shelf to display your figures With the Castle in it. Now, if it were a playset, most of the collectors displaying Grayskull will probably have it in "Backdrop mode" to save
space and whatever "play features" added would be greatly ignored.
And if we go with Mattel's suggested price for a Full-fledged MOTUC Grayskull, I don't see people shelling out for Multiples WHILE buying Multiple Subs for the year. Heck some may be forced to choose between one or the other.
Now that's Just Grayskull, add Snake Mountain, The Fright Zone, The Slime Pit, Crystal Castle, Crystal Falls, the 3 Towers of Eternia, Nordor, Starship Eternia and any other places that never had a playset in the vintage line that now can:
Like Eternos, Hordak's Temple, or the Whispering Woods.
Here's the thing: No matter what they do, either a backdrop or a full Playset, they will never be able to match the full scope of the place. Like say Grayskull. The MOTUC Canon seems to be a combo of both vintage and 200X Canon, so that means the Normal Castle and the Crystaline sub-basement where the power of the sword is hidden. Now if the MOTUC Castle were to be made and they were to include this Additional Element to the Castle, it would require to make it even taller and add extra pieces for it to make a bit of sense from the outside. Which I guess it would mean a bit of the Abyss in front of Grayskull and maybe the Filmation Ramp for the Drawbridge.
So here's my solution for those other places or areas that a Playset would not work that well: Dioramas.
But not What Mattel calls a Diorama like the Weapons Rack. What I mean by Diorama is something more like the stage on a play, or some other playsets 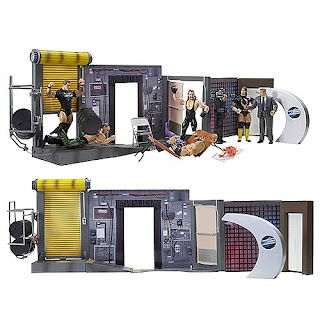 As you can see on this WWE "playset" It's Pretty much a cardboard background, a bit of Floor and some plastic elements.
Nothing too complicated.
So let's say Mattel would release, say, a Crystaline chamber of Power Diorama. It would need Crystaline Structures, a few Crystaline platforms (Think MOTUC stands but large enough to fit A standard figure, Cringer and Orko) and a small alcove to
fit the Orb stand from Temple of Darkness Sorceress and the chest where both Swords are kept. Now that one does not need a special cardboard backdrop, since one can add a piece of black cardboard to simulate the endlessness of the void where the chamber is.
Now something like Snake Mountain Throne Room would require a backdrop and maybe a "special floor" (Either cardboard or plastic if mattel wants to get fancy) I'd say the Throne would be a 3-D piece, maybe some 3-D rocky outcroppings, Skeletor's scrying Table. While this would mean that these Items would be a bit more expensive, it would help displaying them a lot
better than say, the Weapons rack. It looks a Million times better in a Grayskull-like Backdrop!
Now I'm not saying that they should do THIS instead of Playsets/Backdrops.What I'm saying is that These could COMPLEMENT some of the main playsets/backdrops, or be a sort of "appetizer" while we wait for Mattel to figure out the Logistics involved to make affordable playsets.

So, to answer the question: DO WE REALLY NEED Playsets? No, but they are VERY WELCOME! While not Everyone will use the Play features, the option for having them is important. Yes, I am very aware that it kinda contradicts my view of having a Grayskull facade released through MOTUC. That's the whole point! I AM at a crossroads, while the practical side of me thinks: "I'm not going to spend most of my time playing with the Castle. I just changed the original batteries from my 200X Grayskull." The inner child on the other hand enjoys the 56kbps Modem sounds from Grayskull and the lasers! (even if I lost the missiles a long time ago... Stupid spring loaded stuff!) It's all about options.

Since we will never be able to have Truly Accurate versions of the playsets, then the best solution in my opinion is give us a Basic Playset, then expand through Dioramas... 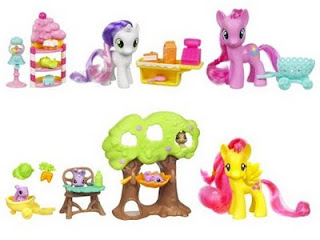 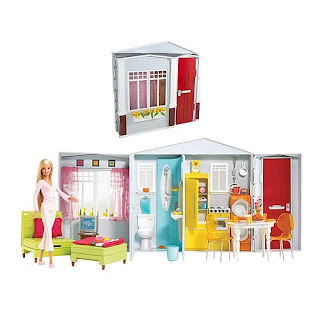 If young girls can survive with smaller dioramas as playsets, without resorting to the Ginormous 3 story high Barbie houses... (That's like a 6 story MOTUC Playset) or using them IN combination with these Titanic displays, then why is it nearly impossible to apply that to an adult collector line? I mean the adult collectors eat up that stuff especially if they include trinkets or other stuff from the shows or the toyline! 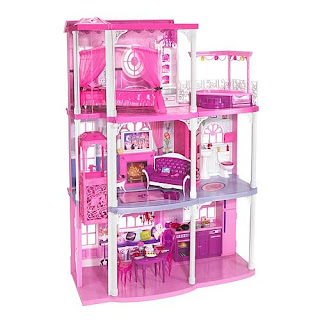 While a Gigantic Snake Mountain like this would be cool, if a Snake Mountain Throne was made available before getting the Entire Mountain, the collectors would eat it up! We may try to deny it, but we LOVE that stuff... We went bananas when we saw the Ram Stone... (GITD Repaint in a Weapons pack please!) If one of these small dioramas comes with the Diamond Ray of Disappearance, The Magic Mirror of the Sorceress, Light Hope (Pillar of Light form), etc. chances are the Collectors will buy them...

Heck! I remember that a couple of collectors were disappointed that Mo-Larr's chair was just a bit of cardboard to display the figures on the box!
Posted by Nefty at 2:58 PM