Odds and Ends My Little Pony and stufff 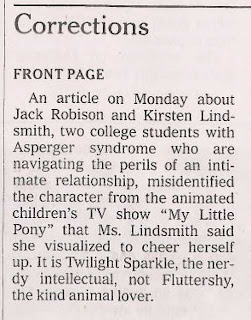 This is from the New York Times, everypony!

Yes, Pinkie Pie... I AM EXCITED!! I dunno if Twilight Sparkle is excited, but she probably will not be due to the next news...

Twilight: the Musical IS a reality. What started as a Youtube Exclusive Parody has become a reality.
IT's very similar to a Very Potter Musical, so that's good... being a parody. Shame I can't be in New York to see it... like that OTHER Parody wait, waht1? That's NOT a parody?


Las Plagas are real!! Luckily they only make bees stupid enough for them to die...

But Pooh would be sad if we don't have anymore honey!

A Pyro Bonobo... Nah! Still, Chimp can light a fire... and help to cook food on the fire... Do I smell a new Survival Show on Discovery? Chimp vs. Wild? Planet of the Apes is becoming a reality... RUN!!