Not even in my weirdest nightmares I would have thought of this pairing. This is not "the best of both worlds."
Well it seems that The Suits see this Merger as pure Win. Well Disney's been lacking in the "Just for Boys" Department. Kim Possible, Lizzie Maguire, High School Musical, Hannah Montana. All of these are "Just for Girls." The last Disney related things to be more Boy-oriented are The Incredibles and Cars. So The Mouse-Eared Suits think that taking over Marvel will help them win the little boys. I just think that it's a case of penis-envy over Warner that has DC Comics.
Problem is that Comic Books target are not kids. Most of them are on their late teens and older. Most of Marvel Comics characters clash with Disney's "squeaky clean image." Spidey made a deal with the devil and there have been no repercussions regarding that deal. Ironman is an alcoholic that sleeps with anything in sight. Wolverine does the same thing and kills a lot. Punisher... Do I need to elaborate?
Hopefully Disney will give free reign to Marvel Comics, but somehow they'll step in so they can attract a boy audience. On the good side this means that Marvel is now backed by the best animation studios and Disney's deep pockets will help make the Marvel Brand more established. (Also there can be a GARGOYLES COMIC!!!) But this is Disney and I fear that they'll push their stars on the projects. Power Pack the movie with a Disneyfied Cast: 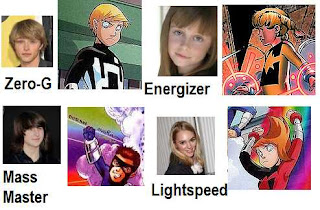 Sterling Knight (17 Again) for Zero-G Alyssin Ashely Arm (Sonny With a Chance) for EnergizerMitchell Musso (Hannah Montana) for Mass Master Annasophia Robb (Race to Witch Mountain) for Lightspeed.
Doesn't look that bad. I know, but as long as we don't go Miley Cyrus for Dazzler, Selena Gomez for Araña it's ok. I do not wat to see Xavier's School for the Gifted Musical.
If Disney gets Marvel does it mean that we'll see Wolverine (with taped claws), Ultimate Zippered Spider-Man on Kingdom Hearts IV? Only time will tell True Believers... and hopefully Disney Magic will undo Joe Quesada's... I mean Mephisto's deal from One More Day.
I love Disney, I love Marvel; I just don't know what to do with this new amalgam. Marney? Disvel. If Miley shows up in a Marvel comic I'm buying that... Especially on Deadpool. Oh no! They could make a comic book with the Jonas Brothers as Superheroes... I just threw up in my mouth. (Great! looks like I'm gonna be having nightmares tonight...)
Posted by Nefty at 4:54 PM