It Came from the Toy Chest: CAWs are no longer exclusive to videogames pt.3 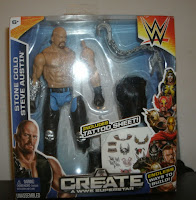 What? Yeah, I ran out of CaW themes... By the time of Here Comes the pain, they just cycled through themes...

It's either that or make a Fred Durst reference from Just Bring it!

but yeah, let's talk the somewhat MOTU-ized Stone Cold Steve Austin... So much leather... He looks more like an Outlaw Rio Blast would be chasing down the Starband. Also, I see a little Mr. Slave in the look that Stone Cold has...

Articulation:
Literally the same as past Caws.
Right out of the bat I must point out that THESE FIGURES have a LOT LESS Articulation than the elite Figures. No thigh cut, ab crunch, single joint knee, no bicep cut... They're like the Basic figures for kids. but semi modular parts.
3.0 They are great for standing around, but these ain't WWE Elite figures, so poses are limited... 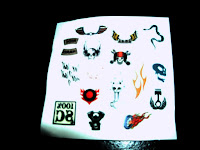 Paint and Sculpt:
Same issues that plague other figures plague the Texas Rattlesnake. Lack of paint here is not as offensive as other figures, but there are plenty of parts that are obviously missing paint. The Sculpt is OK-ish with the parts needing to be accurate doing a functional job. Not perfect but passable.
4.0

Accessories:
Decal sheet, chained hook weapon, vest. 3.0 Like Sheamus, Stone Cold is a basic figure so he has less stuff by default.

Overall:
SCSA gets a 3.33 as his final score. I blame the less than stellar articulation and lack of paint applications on the figure. With some parts from the Rocker Set (would need to get 2 of that one) I could make a Custom Skeleteen with that figure and Stone Cold...(Not a 100% accurate Skeleteen though...)