Why Double Trouble infuriates me...

This rant isn't about the character, per se. This rant is about Mattel's design team dropping the ball 50 stories down with Double Trouble... or Mischief if we go by her Matty Name... (another Poing Super Combat situation)

So, what does it about her that makes me so angry... Well, it goes back to Ruben Martinez... AGAIN!!
You see, Ruben decided to do her EXACTLY LIKE MAN-E-Faces. Man-E-Faces, unlike Normal figures has a revolving face. Man, Robot, Monster. When you pop off the helmet, his head has a conical shape, due to the 3 faces and the dial to change them. Now to create the illusion of a normal face, he has some pieces of "Armor" that cover his cheeks and the  outer jawline. Hell, the fourhorsemen even sculpted a chin for him (that can't be seen under normal circumstances)
So... For Double Trouble, they did the same thing... In all fairness, the 80s DT has the same feature and was done similarly. Problem is that they did it TOO Similar to Man-E-Faces. The Fourhorsemen had made Two heads for her, but Mattel said no.
On a recent Q&A at Popcritica, Mattel had this to say:

While there isn’t any “one rule”, for Classics, we have done our best to replicate vintage action figure features when possible when it does not break up a sculpt with a lever or push button like 200X had. Mekanek is a great example where a snap on neck took the place of a fully tool’d torso with an inner mechanical feature that would have been very expensive. For Double Mischief specifically; two completely different heads would have been cost prohibited due to the large size and deco needed for her hair and helmet. We could not afford to include two essentially “oversized” heads on one basic figure. The turning feature, which was also used on Man-E-Faces was our solution. - See more at: http://popcritica.com/ask-matty-july-15-2014-edition/#sthash.obF5n5mm.dpuf

Now here's the thing: Two heads with Helmet and hair would have been Expensive. That is understandable. Her hair is LONGER than Entrapta's.

Here's a couple of crazy ideas:
-2 Heads, One Helmet. Vykron got one head and two helmets. This is similar. I'd use the peg from the Hair that plugs into the helmet to plug it into the head and keep everything snug.
-One head two Faceplates. This is loosely inspired by Mantenna. I know the crude drawing below seems a bit complicated. I'll explain.

The top of the faceplate has a loop where the peg with the hair would slide into. Keeping the hair and the faceplate attached to the helmet. The helmet would have a small peg that would hold the bottom part of the face. The reason for the lower peg to protrude from the helmet is to allow space for the traditional hole for the standard neck. There's no real risk of the faces falling off (due to the loop held by the Hair peg.

-The third idea keeps the Action Feature. The only difference is how the barrel would have worked.
Instead of making the necklace look like a freaking tire, her neck would act as the base for the spinning head.It would keep her face looking like a normal face. (though slightly squashed for it to spin on her helmet.) 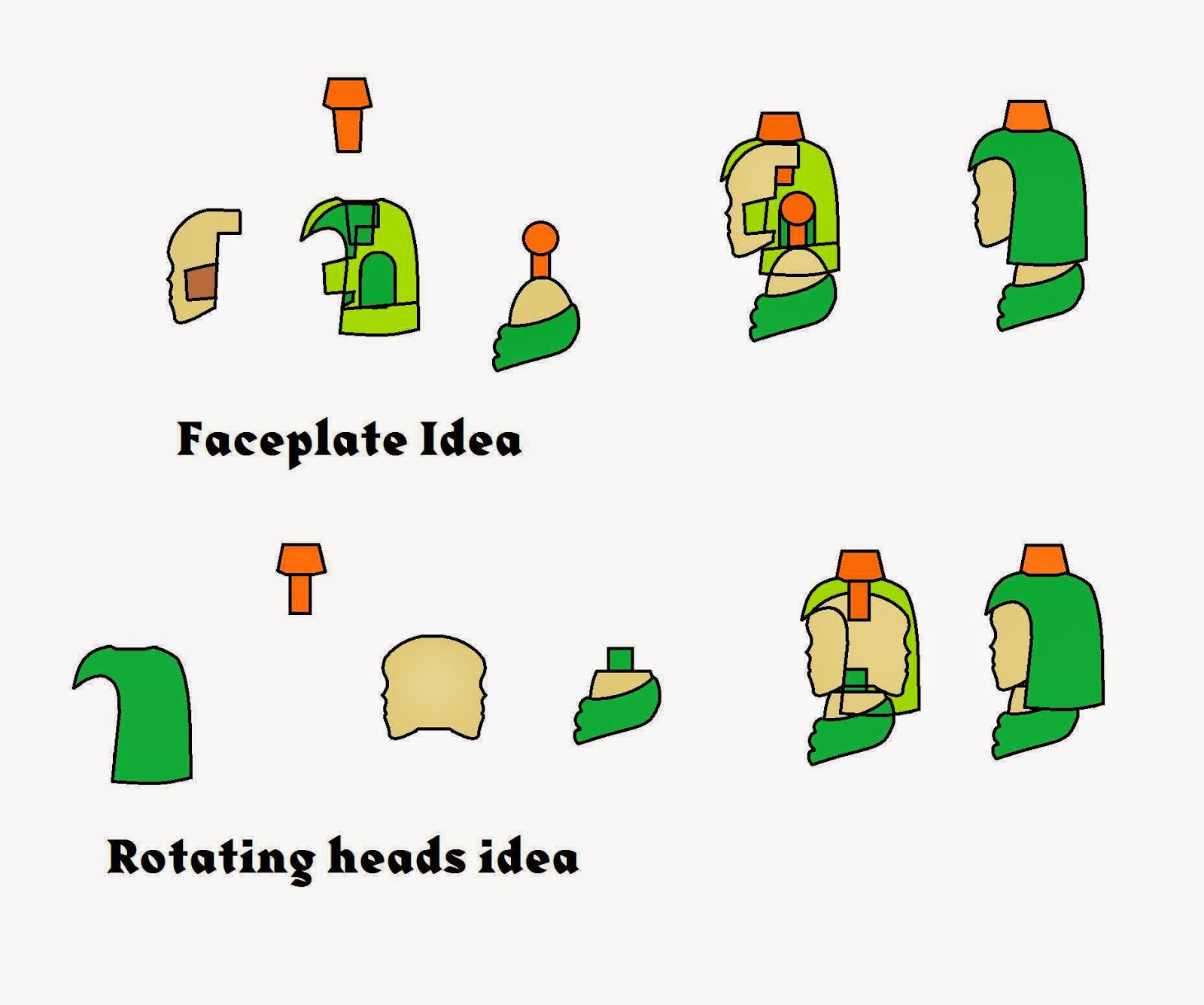 Sadly, it is rather obvious that Ruben just went with the laziest (and least aesthetically pleasing) solution. I know it's pointless to mention "what could have been", but I'm just trying to get rid of my anger for the It Came From the Toy Chest starring Double Trouble. (and save some time and space on the review without having to go in depth on this issue.)