I've complained about this new reboot of Fantastic four and called it racist because Johnny Storm is the Human Torch and will be played by a black actor. How could this be OK'd and no one bats an eye? The black man sets himself on fire constantly.

Now, the folks in charge of this movie are talking about making the movie more realistic and gritty.
Realistic and Gritty movie about a man who stretches his body, a woman who turns invisible, a man made out of Orange Rocks AND a man who lights himself on fire and FLIES!?


Aside the Horrible Casting choices. (All 3 Male Leads), the idea of a Gritty Fantastic Four is MORONIC!

The Fantastic Four lend themselves to Adventure styled movies. There is some sort of Jules Verne inspiration in some of their earlier adventures. The Microverse, Subterranea, Atlantis, The Negative Zone. All of these lend themselves for Adventure movies with the F4. Something along the lines of the Journey to movies.

The Skrulls, Namor and the Atlanteans, the Puppet Master are great Fantastic Four villains that are not only Fantastic enough, OK Puppet Master is not that Fantastic, but his powers are pretty cool and I just want to avoid using the Latverian Diva. 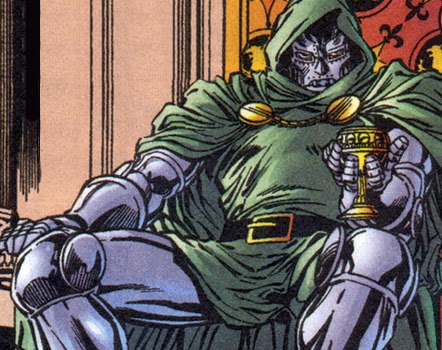 We need someone that is NOT Freaking Doctor Doom in a Fantastic Four Movie. IF Doom Happens, he'd better Wear THE REAL DOOM Clothing. (As seen on the Pic above)

Now seeing that the Director is the same guy who did Chronicle... *shudder* I can be certain that this movie will reek of Chronicle with a F4 skin over it.

Is it a little bit too much to ask for a Fantastic Four movie that RESPECTS the Source Material?
Posted by Nefty at 9:56 PM