It Came from the Toy Chest: Swift Wind hates him

Because Geldor is coming. I've rambled on his uselessness before... 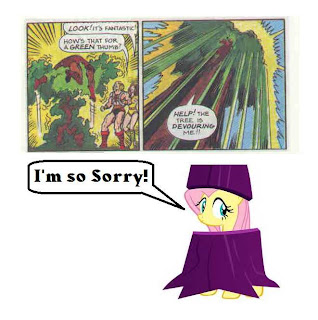 and I won't let go on the fact that the Horse castrator was killed by a Tree that ATE HIM!! 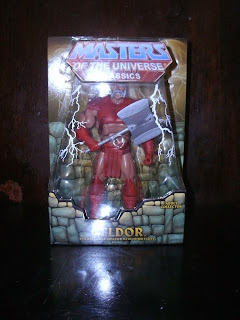 I'm not going to mention how Duncan, Sorceress, Stratos, Possibly Mekaneck and other characters like Hordak, King Hssss, etc. have died and have REMAINED DEAD!! Hell! Sorceress was KILLED Before she got an action figure. But not Geldor... He died pathetically and has come back to the land of the living, just because he "won" the fan-poll in 2012... (That closed earlier than Mattel had mentioned it would.)

So, back to Geldor. So, he's a mini comic character who came, saw, got killed. Talk about dead end. Instead of making him a one-off villain from Adam's early days as He-Man, he is now a more permanent threat. So, let's take a look at the Masters of the Universe Classics Geldor Figure! 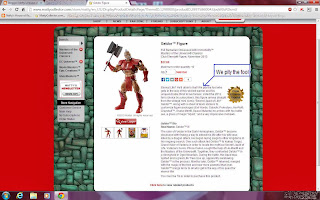 But HOLD IT!! Everyone's making Geldor's Mr. T Jokes... Since 1984... I just can't believe that
Mattel would Actually do one on their site!
I mean they're so afraid of Lawsuits, but here they are using one of Mr.T's most popular quotes with a character that looks like Mr. T if he was some sort of Mad Max Reject that is wearing Nipple Clamps...
It also doesn't help him that Mattel mentions his magic "liquid"... My PCP theory isn't as far-fetched now... right? 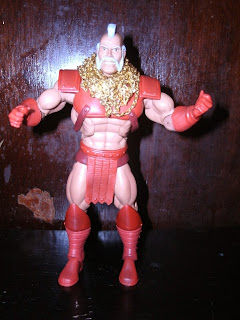 As always, MOTUC Figures come in the standard MOTUC Package. Geldor is in it with his "Water" and his Ax that looks like a Pizza Spatula.

Now that he is out of the package, we can begin to go into the full-fledged review.
I'm not going to pretend that I'm excited about this figure, because I am not... (Hence why I'm doing a written review instead of a video. I could totally feign interest, but it would be dishonest.)

In any case here's a Mandatory Mr. T Joke... 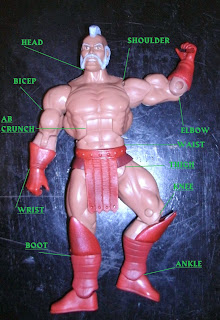 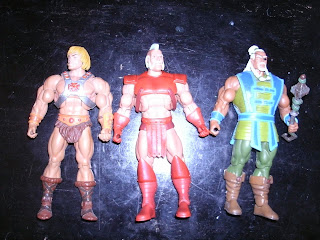 He's got a few new parts: Head, duh! Armor, Loincloth, Knees and boots... The new pieces have me thinking... This Loincloth repainted. A new secondary belt like Fisto (with the thigh armor, these knees with Trap Jaw's boots and Demo-Man Feet would lend themselves for a 200X Skeletor. To be honest, I expected a reuse of Skeletor's loincloth and Bow's boots on him. I am pleasantly surprised with the newly sculpted parts. Now his Paint Job, first thing I want to point out is that Mattel had him bleached... Almost as if they're afraid of being sued by Mister, Middle name Period, last name T! He looks more like a white man with a tan than the black man he is on the mini comic. Seriously, He-Man looks like he has a darker Skintone than Geldor... And He-Man is a white man with a tan... Now the paintjob on his clothes is a bit sloppy. there is a gash of light red showing off on his loincloth (It's light red painted brown). The Metallic Red on the Kneeguards is a bit sloppy on mine. 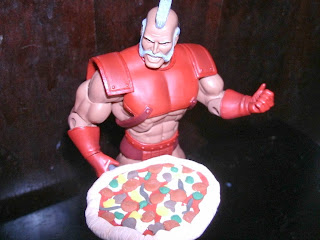 Geldor has his Ax, the one we see on the cover of his mini-comic. Shame that we did not get a Shield as well. His other Accessory is the Glass of Secret Liquid of Life. It looks like a glass of water. The one thing that TRULY bugs me is the glass of water... I have to force his hand to open up so he can hold it. that will screw up his hand in the long run... I couldn't open the hands up for mine... (TBH, I didn't try too hard... I won't break a Geldor just to make a point)
Also, I must complain about the glass itself. It's not clear. It's got a slight yellowish tint that makes the water look a bit murky. 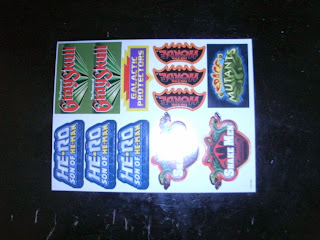 OVERALL:
I'm not wowed by this guy... I mean a few Mr.T jokes, Pizza Spatula jokes. Nipple Clamp jokes. Other than that, he's useless to me. I can almost understand how the POP haters feel when they get a POP Figure with him... I just don't LIKE The guy... Not even if Mattel tries to bribe me with a Sticker Sheet... Yeah, we got one of those again... I can't like him at ALL! I mean I can make tons of SLL Jokes (Spector fangasming over him, Cobra Commander jokes, lame knight jokes when Extendar shows up...) but with Geldor, well the well ran dry pretty fast. I already did the He got killed by Fluttershy joke, Mr. T Joke, Pizza Joke, the PCP joke... I got nothing more. I can't take him seriously, nor use him as a joke... What to do, what to do...
3.17

Labels: He-Man, It came from the Toy Chest, Mattel, review