We should totally get Discord as a Toy... 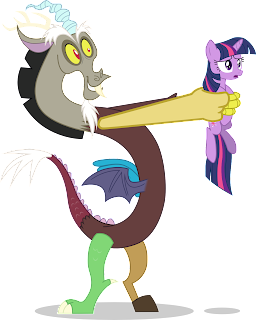 Yes I've mentioned this before a few times, but we Totally need a Discord Doll in the MLP: FIM Toyline...
He's now a semi-Regular cast member on the show (He even shows up on the Season 4 Intro)
He's a fan favorite villain (apparently turned good)
Why else could MLP Fans want him for?

I mean look at him, he's the embodiment of Chaos...
Voiced by John DeLancie in the cartoon, he's pretty much Q from Star Trek!
Besides, it's not like we have not gotten any MLP Villains
(Nightmare Moon Sunset Shimmer and Chrysalis come to mind... Nopony wants Sombra, cause he sucks!)

Discord is awesome... Way better than the other 3 villains mentioned.

The only real Argument against making Discord would be tooling... We know that Hasbro has Mattel beat in the parts reuse department... If only there was some sort of Special Convention that Toy Companies get a separate budget from their normal lines to make special items for said con...

Discord is the PERFECT MLP SDCC EXCLUSIVE!! Bronies tend to be the main target for SDCC Exclusives. Fashion Scaled Derpy, the Lame Swarovski  DJ-Pon3 and Princess Twilicorn (blegh!) come to mind. He wouldn't need rooted hair nor too many POA. Just maybe head and arms. Give him a few discord accessories like his reversed umbrella, the glass of Chocolate Rain (references to Return of Harmony) and last but not least:


Bronies would FLIP if they could get a Discord doll/Figure... I know I would!
Posted by Nefty at 8:45 AM