Damn my self imposed rule of not Cursing in written form... I read this article on i09 (a site I despise due to their banning of Rob Bricken's Fan Fiction Friday... Because Fan-fic writers got butt hurt at him criticizing their fanfics... Seriously, if you write a pseudo romantic fanfic about Sherlock Holmes getting enemas from Watson, or Twilight Sparkle turning Rainbow Dash into a Hermaphrodite human to have sex with her, then you deserve the mocking criticism...) Let's just say that I'm not a fan of this site... But this Article caught my attention:
Paul Dini: Superhero cartoon execs don't want largely female audiences

OK, so we get CRAP shows like Uncle Grandpa and Teen Titans Go! whose only good thing is having the real Teen Titans voice cast... (I ♥ Tara Strong, Greg Cipes is cool too! and Robin is Ma-Ti... and no post would be complete without me praising the Tara Strong!) BECAUSE they want to appeal to young male viewers so they buy the toys...

Let's use Young Justice as an example: Those toys were unbuyable... The smaller scaled ones were CRAP! The Larger toys were overpriced because of the nearly useless bases. It was a lose-lose situation... (and this comment adds up to the many reasons why I'll never get free samples from Mattel.)

This "Girls don't buy toys, therefore we don't want girls in our audience" crap is... 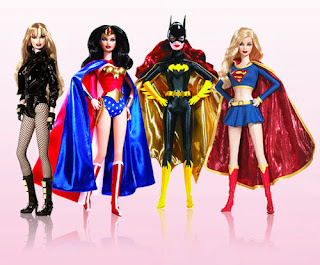 Before anyone starts bitching about Black Canary's Fishnet Stockings. THAT IS WHAT THE COMIC BOOK CHARACTER WEARS.
These were part of an Adult Collector Barbie Line... DC Heroes made with Barbie Bucks? How can't they sell these to girls again? 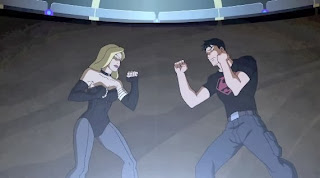 OK, if we were to assume that they'd be for Young Justice, Black Canary could have gotten Grey Tights as seen in the Cartoon shown on the right. If the "geniuses" at Marketing can't figure out how to market to both Genders, it's THEIR Fault.

This reminds me of She-Who-Musn't-be-Named and her bullcrap crusade against sexism in videogames... The idea is good, it's her methods what I disapprove of. These Dumbass executives are what allow People like You-Know-Who...

and, no I'm not talking about Lord Voldemort... to tick people into donating money for opinion pieces passed off as facts. Executives like these dumbass pieces of crap, are the reason why freaking good shows get the can (200X MOTU, 201X Thundercats, Young Justice) and we get absoulute TURDS for shows in their place (Incredible Crew, Level Up!, Uncle Grandpa, Annoying Orange)

Guess what? Great shows that are liked BEYOND THE TARGET AUDIENCE bring forth new customers... Do I need to point out the show for Little Girls that I FREAKING LOVE and have a buttload of Merchandise of?

I'm sure as Hell that I am NOT NEAR the Target demographic of this show... Why do I support it, If I'm not it's Target Audience? BECAUSE THE SHOW IS GOOD AND IT'S MARKETED WELL...
OK, so I buy the actual toys. I don't buy the panties or socks, but I got a Brony Shirt from Hot Topic. I've got bedroom curtains, If you're a regular here, you know that I also have the Toothbrush, a plush, and other items. There are other venues to sell merchandise to those who don't buy the toys. It's all a matter of the Marketing guys actually DOING THEIR FREAKING JOB!

It's idiots like these why NERF had to make a SEPARATE Sub-Line for girls instead of selling their toys as unisex toys. Or why LEGO has to market a Separate Girls' Toyline that is not compatible with the Regular Sets.