Yeah! We're getting MORE Popular characters from MLP Friendship is Magic in the Blind Bag Scale... 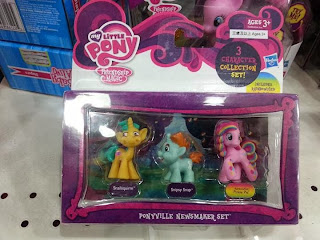 We have something called Rainbow Power...
Whatever That is... It's going to give us, freaky Rainbow-tized Ponies... No!! Don't Tell me that Dashie Kicks the Bucket or something... but LOOK AT THIS 3 PACK!! It Has Snips and Snails!!

The Idiots who always seem to end up as a Minor Villain's Sidekicks are coming in the Blind Bag Mini Scale...
I have to say that it's Pretty Awesome that we're getting them somehow...
(Their chances are pretty slim in the Playful Pony scale) 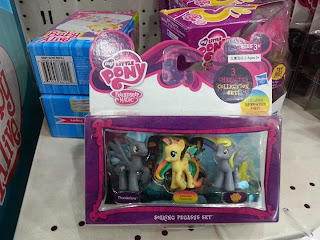 Oh but that's not all! The second set that is coming has True Fluttershy Rainbowtized!!
Codnabbit! I haven't even found the Normal colors set with Wahaha! and Steven Magnet!

There's some pegasus colt that, I'll be honest, I don't give a flying feather about... The other Pony on this set is reason enough to buy this set... 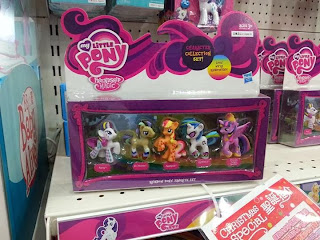 This next Set Completes the Rainbowtized Mane 5... Assuming Dashie Died and became assimilated by the rest... (So much angst) This set is a 5 Pony Set...
It Starts with Worst Pony, Element of Greed, Rarity, Then it has The Twilicorn Princess herself, the Silly Pony Applejack, the Pony with the Power of Wubs, DJ PON-3 and last but not least a Pony Popular with the Bronies... Especially those who enjoy a show from the other Side of the Pond...


YES YES YES YES YES!! We ARE FINALLY GETTING A HASBRO FIGURE OF DOCTOR HOOVES!!
Sure it seems like he got a wibbly wobbly rainbow there... (Perhaps that's how Rainbows look in Gallopfrey) but that means that Hasbro has made a Doctor Hooves Mold... So he could come in normal colors in future Blind Bags!!
(Now if they make all 12 12.5 Regenerations of Doctor Hooves, I'm gonna be all Rainbow Dash)