It came from the Toy Chest: Behold thy deity... Haruhi Suzumiya has arrived.

I finally got Mikuru and Koizumi, so the SOS Dan is finally complete... CORE Members. I still haven't gotten Tsuruya, and they never made Kunta Kinte and Tamagotchi...
I mean Kunikida and Taniguchi.
So, quick recap on Haruhi: She is God, but she doesn't know it. She can unconsciously bend the universe to do her bidding. She could destroy the entire universe if her enotions hit the right notes. Unwittingly, she has drawn the attention of exceptional beings that want to keep Suzumiya in check.  Not to mention her well known desire to meet these kinds of beings: aliens, time travelers, espers...
Now trapped in all this mess is this average, ordinary guy with no name... He has a real name, but evwryone calls him by his niclname, Kyon. He's the voice of reason and the only person who knows full well of Haruhi's power and still dares to oppose her will. (Even if he ends up doing what she wants)
Haruhi, being a vengeful god, often puts him through the wringer. 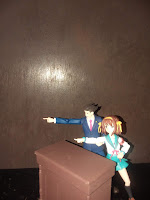 Also, Phoenix Wright references... there's an episode in which the conclusion is VERY Ace Attorney games... And, the English dubbed version has Haruhi, voiced by the same VA who plays Athena Cykes... (I guess the Haruhi Episode landed her the Cykes gig) so, I ended up with a whole SOS Brigade just fpr a Phoenix Wright reference.

Articulation:Haruhi seems to have standard fare reticulation for a Japanese figur.e I personally don't have that much experience with figma figures of the female variety. My figma experience has been limited to my bootleg Snake, possibly bootleg Link or maybe both Links, I'm not sure, and a legit Phoenix Wright.  The articulation is decent. Most of the show poses are doable as seen in the stop motion video not made by me... 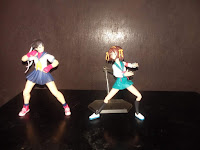 Paint and sculpt
Haruhi's sculpt is incredibly spot on. Taking in consideration that she's a Japanese super articulated figure and a couple joints are a bit unsightly. While tinkering with Haruhi to take some pictures I noticed something a little peculiar. One set of hands is sculpted to perfectly match the shape of Mikuru's breasts.
The paintjob is minimal but effective. No issues on mine.
5.0

Most of the pieces swap easily like the shoes which can be a little bit of a pain but that's good because they're stable this is an older type of figma so be careful with the hand joints.
5.0 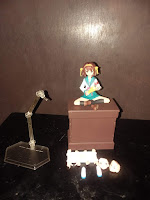 Overall:
It's obvious that Haruhi's s going to get a 5.0 here. She's a really great fear worried about it being an older figma and the fragility of figma especially the older ones. But really she feels like a very sturdy figure for a Figma and it's actually a lot of fun to be playing with her! Yes, I said play. 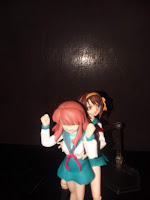