The Dishonor of Grayskull returns with season 1.5 part 2 (language)

It stinks! It's shorter than "season 1" and out of 7 episodes 4 of them feel like Filler... I did a full play by play of the first episode... won't do it to the others.

Let me vent my frustrations:
They promised out a gayer show... they barely delivered with Bow's two Dads... No, Paul Reiser wasn't one of them.
And maybe Scorpia's desire for friendship with Catra could be perceived as something else...
Aside that, they delivered NONE of the Homo!!!
Is Scorpia an adult woman pining for a teenage Catra?
The LightSpinner episode showed the black Garnet being delivered to the Horde when Glimmer's dad was a child.
And Scorpia mentioned her family handing over the Garnet to the Horde. I COULD BE WRONG, but it CAN BE interpreted as Scorpia being an adult in love with a child due to Scorpia looking much more "adult" than Catra and the whole timetable...
I'm NOT SAYING that this is true... but it does raise some questions.

While there were more action scenes, there is nothing at stake here. Hordak has been WAY TOO HANDS OFF in this operatuon and all the battles have felt inconsequential.

The constant attacks on the original show aren't cool either. I understand that the original show is bit corny sometimes campy as many of the cartoons of the era were.
The problem I have is that this show "throws nods" at the original show but they are laced with Venom. When used in a serious manner the "Sword to__" Transformations were actually kind of cool. It works as a reference to the original cartoon and allows for new possibilities for the new She-Ra, but they had to mock it in the first episode.

Also, the animation is still awful... 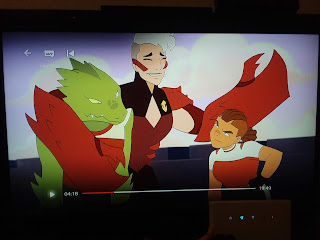 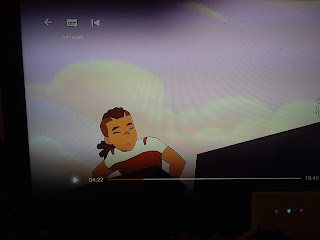 Same episode less than 10 seconds apart and Lonnie's chest has shrunk in size... the waist to hip ratio also fluctuates within the characters. For a show that's allegedly superior to the original, it's making amateurish animation mistakes that hurt the so-called superiority of the product.
In the other hand background art is still cool!
Did I mention the huge amount of Filler? I mean we reached orange and blue Tracksuit Ninja level of filler...


We learn that Hordak is a zombie wearing armor, shadow weaver is going rogue, Tyrone comes out of the closet... not THAT Closet, to his dads. Sea Hawk is reduced to a joke character. The moment I feel bad dor Sea Hawk is the moment you should realize that you fucked up!

I still have to see the final 6 episodes to truly complete Season 1... whenever they air...

I wish this show didn't suck as much as it does, but... it does.