It came from the Toy Chest: Stanley figure... 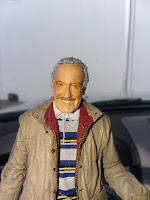 Remember the cancelled Stan Lee BAF? Someone got a hold of the head and apparently started reproducing casts of it, painting it and selling them online on random bodies.

Mine is on a McFarlane Toys body, specifically Mike's body from stranger things.
At first I wasn't sure where the body came from but when I opened the box where it came in, the stench of plastic that the figure emanated reminded me of the old McFarlane Metal Gear toys. One Google search later revealed me the owner of the body.

The head of the other hand feels Hasbro-like. I'm not sure if he's glasses were meant to be removable but since they don't plug into anything... I ended up gluing them to his head so I wouldn't lose them.

I will not do the standard review with articulation paintings called accessories because since this is i Custom figure based on on bootleg pieces. I can't really be fair with it. Unlike the infamous bootleg snake or bootleg Goku this is just a kitbash made out of random pieces so it kind of counts us a custom and it wouldn't be fair for me to criticize a custom figure that's literally a kitbash.

If you can find one in a Hasbro tuxedo body it would be a much better deal than having him on the stranger things body; but that's the only one you find go for it! I know it's a bootleg and some people hate that but it's Stan Lee!

Labels: It came from the Toy Chest, Marvel, rant.