It Came from the Toy Chest: She will totally get the D... 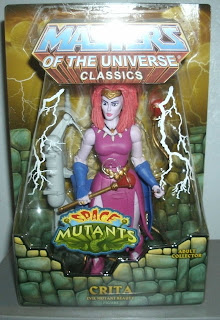 I mean the D as in the grade, not the D as in penis... though she can easily get that D since she is going Commando... and I don't mean the Ahnuld movie. I am talking about Skeleteen's Stepmother... Skeletor's Mistress... IN SPAAAAAACE!!! The one and only Crita... (voiced by the same VA as Princess Lana from Captain N, Girl Ranma!? I miss Ranma 1/2... And one role I won't mention here, dahling... because it's G3... and G3 is blegh!)
Who is Crita? 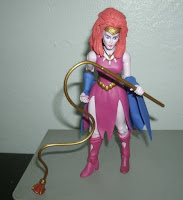 The only Female Space Mutant in New Adventures of He-Man... She's there to fill the role of Evil Lyn, but more Tech inclined. The mutants hail from Denebria... It starts with the D... so it's not a coincidence...

Why do I say she gets the D? as in the grade... Let's find out! or oot! (Now there's a Canada joke, eh!) Cause, you know New Adventures of He-Man (and 200X) had the recorded on the land of Maple Syrup that gave us Justin Bieber and 'Nita. On the other hand they also gave us William Shatner and Tom Green. 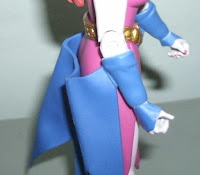 Now let's check out my day of sale Crita meant to be a custom... Still waiting on my subscription package to arrive.

They gave her ML Ankles... Sadly, the skirt limits some of her leg articulation. 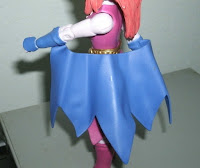 The Arms are barely poseable due to the super short shawl they used on her. It's hard to use her whip weapon in a cool pose because you have to shift the other arm to an awkward position in order to have one arm looking cool. Even using her gun is a bit of a pain.
2.5

Paint and sculpt:
The sculpt as always is pretty rad. Horsemen rarely fail here. The paint, well, Chinese workers don't give a damn and since Matty doesn't even give a damn either. My Crita has a slight derp. it's not that noticeable, but I noticed while taking pics. The paint on her scepter ended up in her right hand. Sadly, the fear gas gun has ZERO paint apps. 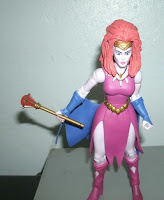 As I stated she has a scepter, the whip mode for the scepter, and a fear gas gun.
I have to say she gets a 3.0 I blame the gun barely being able to be held... in an awkward position. Also her whip being unwieldly (even using a figure with full motion range)

Overall:
Crita gets a 3.0 as her final score. Bad paint applications, horrible articulation and slight issues with the accessories drove her score down... 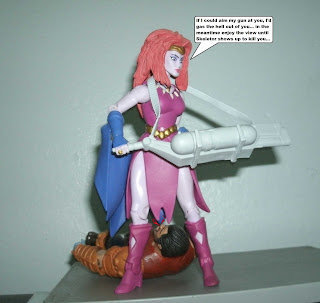