Spider-Man far from home dropped the trailer today and it was full of spoilers for Avengers: endgame. But that isn't the biggest spoiler in it.


Mysterio claims that he's from Another Universe...
Everybody and their dead mothers are flipping their Lids about this reveal. I know it sounds nice and dandy having multiple universes so they can kind of fix some potholes creating some new plot holes and some people are thinking that's the way to bring the Fantastic Four and X-Men to the MCU.

And I'm not convinced first of all this is Mysterio we're talking about. And this reeks so much of a High Special Effects con by Mysterio. Just think about it...
Having Mysterio working with other villains like molten man possibly Hydro man and whoever else is on the scheme... setting Mysterio up as a hero and the others are his arch nemeses. Playing a catch-and-release game on till the big score. Ice it is right now the MCU is not ready for a Multiverse Theory being a Multiverse fact. 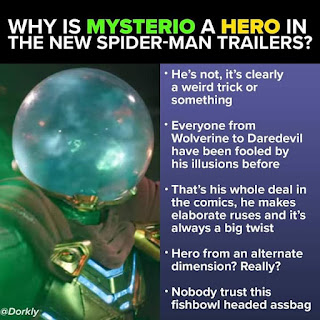 Seriously don't be fooled by the guy the fish bowl
Posted by Nefty at 12:48 AM