It came from the Toy Chest: infamous Black Sabbath song

Has he lost his mind? Can he see or is he blind?
And I better stop there, since I'm talking about the OTHER Iron Man... The one and only DOOM!!!
Yes, Doctor Doom was Iron Man for a little while... We can blame... take it away, Victor...
RICHARRRRRRRRRRRRDS!!!
and The half kREE warrior, Carol Danvers. Aside Ironheart, Dr. Doom was Ironman for a little while, and this Walgreens exclusive encapsulates that version of Doom... Now can we get a REAL Victor von Doom?

Articulation:
He's literally a repaint of the pegwarming Iron Man of the Okoye wave. And he feels just as stiff. The cape limits a lot of the poses... and he looks utterly stupid without it, because the head has the hood attached.
4.0

Paint and sculpt:
Aside the modified head with hood. He's a literal repaint of the Okoye wave Iron Man. The extra arc reactors are PAINTED ON and they look crappy because of it. He's molded and gunmetal gray plastic with a few green accents painted on. The extra Victor Von Doom head looks nice actually.
4.5 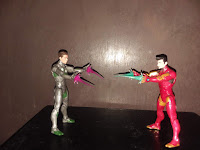 The lightning is super soft and floppy.  Think it's a reuse from Storm.
The hands and repulsors are reused from Iron Man.
The head might be new.
5.0

Overall:
Doctor Doom pretending to be Iron Man gets a 4.5 as his final score. It's a pretty decent score for I figured that I really didn't want to will be honest I was swayed by the extra head. Hopefully hospital will released a classic Doom further down the line that could use that second the head.
Doctor Doom has used an Infinity Gauntlet before so how about an Infinity Gauntlet Dr. Doom variant for Walgreens? Or hell, a Doctor Doom with a Time Platform...
(Literally a square poece of plastic painted in metal on one side and in Trippy Timey Wimey colors on the other. 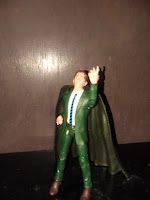