It has been ages since the House of Rants has been graced by Stan Lee's presence. Last time it was a Marvel Legends custom and before that it was a blue roided out Stan Lee... aka Standor. I won't go into details about Stan Lee...

Stan Lee is pretty much the Retro wave Peter Parker... but while it was disadvantageous for Peter, it works wonders for Stan Lee. He can do whatever an old man can. What I mean is that this body works better for Stan than it does Peter.
4.0

Paint and sculpt
We've seen this body in action with Pete already... Yes, I'm aware that Stan was released first, but *I* bought Peter first. Aside the head, feet, and hands, Peter Parker and Stan Lee are virtually the same... also this figure is a huge improvement over the 2007 San Diego Comic-Con exclusive.
Paintwise my figure is pretty good but there are a few things you must look out for:His mustache and his glasses. I've seen a couple of reviews that mention that the paint on his glasses and his mustache can be a bit spotty. Not as bad as the bootleg heads or bootleg custom figures that were floating around the internet about a year ago, but it can be bad.
4.5 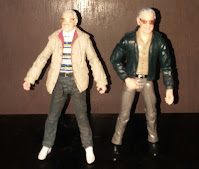 Overall
Stan Lee gets a 3.83 as his final score. I think that the weird accessories hurt him a bit more than I expected. Don't get me wrong he's a good figure, and a great representation of a normal-looking Stan Lee. I'm going to go out and say that this is the  second best Stan Lee figure that was released at an affordable price. The best Stan Lee figure from a face sculpt likeness point of view is Standor, but as an overall package this figure is the superior one.

Seriously, its fun having Stan around in ML scale.

I kinda wish we could get figures of Steve Ditko and Jack Kirby... Maybe even John Romita Sr. and Joe Quesada... I'd buy two of Quesada. One to keep as is and the other to make a Joephisto.
Posted by Nefty at 9:43 PM