By all of us I mean me, Spike, the Toy version of Me, and that's pretty much everybody. I hope you were good for goodness sake! I still haven't received my Snake Mountain and TMNT wave 2 from Super7. Advent calendar ICFtTC was a bit easier this year. I tried to delay it as much as I could hoping that Snake Mountain or NECA Tokka and Rahzar would've made it. Billie Eilish was a last minute addition, because I didn't have enough time to properly review the Avengers 6 pack from Toys R Us. Mattel is still keeping Masterverse way too close to their chest.

The most pleasant surprise out of the whole 2020 Advent calendar ICFtTC is definitively Spawn. He's not perfect, but it's the Spawn I had been hoping for since 2002. Now for 2021, I'm going to look into PVC panels, PVC pipes, epoxies and resins to see if I can make my own Sewer Lair for the TMNT (SH Figuarts and NECA) or Super7. Maybe a Fright Zone and Slime Pit for MOTUC in order to motivate me to finish "the toy room". Maybe even a Pit and Goro's lair for MK toys by Storm Collectibles. The Pit would be easy... theoretically speaking... a PVC board held up by PVC Pipe. Said pipe would most likely be sculpted over and have holes drilled for coffee stirrers to act as spikes. Nothing too complicated. The back wall can be foamboard and the base a PVC panel with coffee stirrer spikes. Goro's lair might be a bit more complicated and expensive, but in theory, not that difficult. My goal is to go by klassic 2D MK style displays.

The Sewer Lair will be a lot more complicated. Mostly due to pipes, ladders, etc. It would be a lot easier to make an Inside the Technodrome display. I'm still debating about this because I have 3 seta of turtles to display: the NECA and SH FIGUARTS set, the 1990 movie figures AND The Ultimates from Super7.

Street Fighter is another problematic display... because of the Storm Collectibles vs SH Figuarts display war... I'm leaning more towards SH Figuarts getting a dynamic display thanks to the WWE car. If I can get drumcans and barrels in 1:12 scale, I can do other Bonus stages.

Sorry, I got a bit sidetracked with plans and ideas. Back on topic, toys...
NECA TMNT:
Toon line:
I had to go reseller route to get Krang's android body... because of No Target in Puerto Rico.
Right now all I need is Splinter, Casey, Shredder, and maybe Rat King to "complete" my collection. Kinda want Traag and Granitor, but as they are, it's a bit too expensive for me. Maybe I should  Leatherhead and a TiT Slash to repaint. Wonder if we'll get "toon" Tokka and Rahzar... dammit, I need a Metalhead!
Movie TMNT line:
The rumored April, and IF they make Tatsu and a SotO Shredder, I can complete this one.
Super7  Thundercats:
Vultureman, Snarf, and Bengali would allow me to "complete" the line. I would welcome a Hachiman and maybe Mandora.
Super7 TMNT:
Krang is really the one I need to "complete" the Line. Sure, I'd like Leatherhead, Slash, Tokka, Rahzar, Krang's Android Body, and a Super Shredder. Maybe I'll go the reseller route for Muckman and Mondo Gecko.
Street Fighter:
I still want to get the World Warrior 12... or the SSFII 16 but dunno who will complete the roster. Both Storm Collectibles and SH FIGUARTS are taking their sweet ass time. There are rumors that Bandai canceled the SF line. Need confirmation of that.
Marvel Legends:
They are doing characters I want... they will get my money for them. I kinda wish they could slow down a bit, since I haven't seen many of the waves released...
MOTWWEU:
Mr. T, maybe The Rock, but I don't think I'll be deep into that one.
MOTUO: Tri-Klops, Merman, She-Ra, Hordak, stratps, Ram Man, Mekaneck, Man-E-Faces, and Adam (via ebay without skysled)
Power Rangers Lightning Collection:
Once I get Zack and Billy, I'm done. Having Kat as a Pulse Exclusive was a bit of a dick move. If we get Scorpina, Finster, Baboo and Squatt, I'm there. I still want the Teenagers with attitude set and a Bulk and Skull.
Or not... I'm not psychic and I can't see into the future.
Merry Christmas and Happy Holidays!!
But wait! There's MORE! Someone is coming out the Toy Chest as a Christmas bonus to the Advent calendar ICFtTC after the jump!
This is Heavy, Doc!! 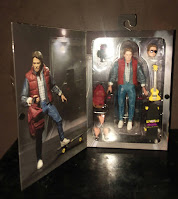 NECA's Back to the Future Ultimate Marty McFly!
Do I really need to explain who is Marty McFly? I mean you can watch The Back to the Future trilogy or at least the first one since this toy is based on the first movie.
Articulation
Marty has standard Human NECA Articulation. Since this figure is made by NECA, we must go through the ridiculous rituals before engaging with the figure. warm up to join, grape up any paint That's sticking joints, moving the joints very carefully, sacrificing virgins to a volcano, and other stuff. Changing hands is a scary thing because of the pins being thin and their hinges incredibly tight. Also his heads tend to fall off when posing.
4.0

Paint and sculpt
The paintwork is really good. Some people will probably nitpick that his shoes are not accurate due to copyright issues. If you have a paint pen you can fix it... steady hands are recommended.
My main issue is that the face doesn't look like Michael J. Fox.  it looks like someone who has never seen Michael J. Fox in the 1980s made a police sketch drawing of him.
4.0

Accessories
1 extra head (sunglasses on)
3 extra hands (camera holding hand, guitar hands. The left holds the neck and the right has a pick sculpted.)
Guitar
Camera
Backpack
Skateboard
While he has plenty of accessories it kind of sucks that we didn't get a third head with the glasses over his eyes and a closed fist hand so we could recreate did Marty checking out the time outside the DeLorean pose used in tons of Back to the Future promotional art.
5.0
Overall
Great Scott! Marty gets a 4.33 as his final score.  If it wasn't for the breakage issues that forced people to be less daring with posing and the fact that his head doesn't look like Marty McFly, he would have been perfect.  I'm looking forward for the fart to figure only for the hoverboard and since I have Marty I need to get a Doc Brown.
Posted by Nefty at 11:11 AM