Advent calendar ICFtTC 16:Fabulous Secret Powers were revealed to me... 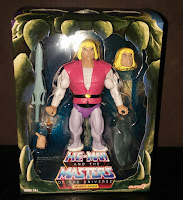 The day I held aloft my Magic Sword and said: BY THE POWER OF GRAYSKULL!! You probably already guessed that I'm going to review a Prince Adam or He-Man figure.

It's Super7's Club Grayskull Adam... as if I was going to let MOTUC END on Stratos...

I won't explain Adam, since I've done plenty of Adam/He-Man figures. Y'all should know who he is.

Articulation
Being at Club Grayskull figure means he has the standard articulation for that line, which is basically the same articulation as a Masters of the Universe Classics figure but with the addition of hinged wrists. The best does not hinder the articulation as much as I thought.
4.5

Paint and sculpt
Adam shares his body with the rest of the club Grayskull figures and the key differences being on the head and vest. My only real nitpicking is that his flesh tone looks a bit grayish.
4.5

Accessories
Sword aloft extra hand.
slightly happier extra head.
large shield from the episode she demon of phantos.
Club Grayskull Power sword
Larger but more filmation accurate Power sword.
Transformation lightning effects for defamation Power sword.
To be honest the only issue I have with the accessories is the lack of gay joke Adam laughing head. I cannot pop the gay joke Adam laughing head from that figure and use it on this Adam because the skin tones do not match.
4.5

Overall
Adam gets a 4.5 as his final score and is a nice way to get some closure on this line. I'm disappointed at the lack of Ram Man but the origins Ram Man could be used as a substitute. Sonce Filmation Ram Man is supposed to be smaller.
Posted by Nefty at 8:48 PM