It came from the Toy Chest: He leads... and he's the blue one. 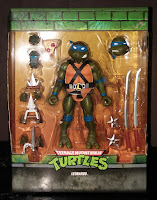 Leonardo from Super7 has finally come out the Toy Chest. Eldest son of Splinter, the de facto leader of the turtles, massive wet blanket, often butts heads with Raphael. Both VAs of his 2012 version have played characters that have dated characters played by Alyson Hannigan. 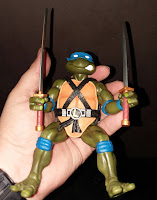 Articulation
Leonardo has the same articulation as Raphael. His waist is not as wobbly, but it still is wobbly. I had a slight scare with his left knee, which was ridiculously tight when opened.
4.0 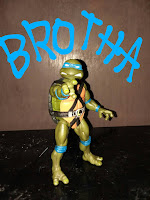 Paint and sculpt
For the most part he's really good. The sculpt is a slightly more detailed version of the vintage toy upscaled to a larger size. The colors are a bit muted compared to the vintage toy. It's not necessarily a bad thing, but some people may complain about it. (Mostly those who don't understand the MOTUC COMPATIBILITY aspect of these lines by Super7) I wish the second head matched a bit better with the body. Looks better on camera. Yes I pulled a copy paste from Rafael because it's literally the same sculpt and the only differences are on the heads and belts.
Think twice he is a bit closer to the vintage toy than Raphael was but he's still feels a bit muted which is a good thing. They changed the scope on the ice slightly compared to the Vintage figure or he looks more like contemplative instead of afraid.
4.5

Accessories
He gets all his weapons in both painted and unpainted modes. Instead of alternate Sai Holding hands, he gers a pair of fists... Raph needs a pair of fists now! In addition he gets a slicw of pizza and the Turtle communicator in opened and closed modes
5.0

Overall
Leonerdo gets a 4.5 as his final score and the loose waist is to blame. I'm halfway through the Toitles... Next Toitle is my favorite, so it might mean that I could be harsher on the criticism or super lenient...
But other reviews await...
Posted by Nefty at 12:22 AM