It came from the Toy Chest: It's Uncle Phil!! 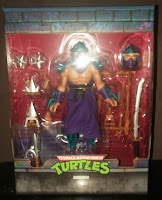 Insert Pillowy Mounds of Mashed Potatoes here. SO, Shredder... main enemy of the Teenage Mutant Ninja Turtles. When I was a young boy, my mother, got me a bunch of TMNT toys for Christmas and Shredder#1 was among those. Shredder number one broke the peg on his left hand and the bar that held the legs broke off after a fall from a third-story.  I got a Shredder #2 before getting a Super Shredder. Shredder one got a "poncho-like" shirt made by my grandma to look more cartoon-like. Shredder #2 inherited the poncho. Until Super shredder game Shredder#2 with a poncho and the cape was my main Shredder until Super Shredder came with his hyper spiky goodness. Now that I have Shredder the Kid in Me is demanding that I make him cartoon accurate.
Articulation:
He has Standard TMNT Ultimates articulation: Translation: No ab Crunch. As you can see on the "in-hand" flashback triggering photo, he can ALMOST recreate the vintage pose.
He has a decent range of articulation, but compared to NECA I find it lacking. Hell even comparing it to MOTU classics, he ends up being a bit underwhelming. Don't get me wrong he can pull off some decent poses it's just that for being a lanky figure compared to a beefy He-Man, the lack of articulation is almost Unforgivable. I know that the 80s figure had limited articulation and that this line is following the MOTUC standards, but he's a NINJA!!
4.0

Paint and sculpt:
Before I went Captain paintbrush on the figure, it had some Great  paint applications. The helmet and blade wear blue, just like you remember, but this time they have a metallic tone to them. The paintwork is very minimal on this figure but it works for him.  the only thing that doesn't work for him is the awful second head with the vintage eyebrow stamped over the helmet. 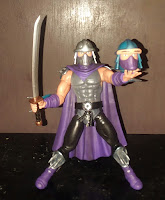 Despite my sloppy job repainting him, he loold amazing.
5.0 before me painting him.
Accessories:
Gripping hands
Open hands
Fists
Sword
Shuriken
Kama
Push knives
Extra head
Extra cape
I'm not a fan of the vintage toy but it allowed me to repainted and have an alternate to look for Shredder. This time I went for a somewhat vintage movie inspired look.

I used a dull gold, black, silver, and a color shifting paint that goes from black to gold to create the look.  if you want to copy my process first I painted the helmet with the that helmet with the dull gold then I added a bunch of black dots to simulate the chainmail effect that the movie Shredder has on his helmet. I dry brushed a super light coat of the color changing paint in order to darken the dull gold which was a little bit too bright for my taste. Then I added the silver accents to the helmet.
I honestly like it a bit more than the toon accurate helmet for him. It gives me options on like a certain rat sensei who could have used a cartoon or movie inspired alternate head.
5.0
Overall:
Shredder gets a 4.67 as his final score. He's pretty cool I'm not going to lie. I just wish he just had a little bit of articulation like the ab crunch and that would have pushed him up higher on the score.
Posted by Nefty at 3:43 AM