Street Fighter 6 roster leaked... What in Tekken is this!?

The Tekken joke will never die, thanks to Capcom's character designs. 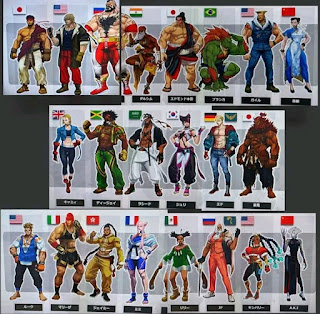 We already saw Ryu and we knew he was Oro-Inspired... but Ken, ohh Lord, what did they do to Ken!? His Outfit looks more Guile-like than Actual Guile. No, wait... Ken looks like a Hobo teying to cosplay as Garou Mark of Wolves Terry Bogard. That isnt Ken Masters:

I expected him to wear something more "casual" like say, the outfit from his SF3 ending but with a red shirt, and maybe a slate grey blazer, sunglasses and red "biker gloves".

Or having the traditional hairstyle while wearing his SFV outfit. At worst a red and black tracksuit.

Dhalsim looks nice! That's because it is different, but still is easily identifiable as Dhalsim.

E Honda looks OK-ish, but BOTH Traditional Japanese SF2 characters having a bare right shoulder with draping clothing covering the left feels slightly too similar. Also it seems that Honda is wearing more clothing down there.

Blanka looks fine, but he seems to be wearing overalls and guess what, he only has the left strap on... 3 different characters wearing 3 different outfits, yet they all have the same repetitive trait. I mean, why can't he wear the right strap and have the left side loose? It sounds nitpicky, but sometimes it's the little things that can drive pwople insane especially if they have some design background.

Guile: What can I say? I know it's supposed to be a sleeveless flight suit, but it looks weird. It looks more like something Ed would wear instead of Guile.

Chun Li looks like a grandma. Losing the spiked bracelets and getting Grandma Jewelry, the Flatter hairstyle and possible receding hairline aren't helping. The Outfit looks OK, but combining the Alpha Yoga pants with the Qipao looks like bad granny fashion. The traditional shoes also make her look old.

Cammy's short hair looks nice! The outfit is confusing. Part of it looks like she's here to fight, the other is looking for a lovely afternoon at the Mall... or doing a bad Sonya Blade Cosplay. I suppose that's the main reason they avoided the color green.

Why is Eddy Gordo here? Sorry, that's Dee Jay!? Any more Jamaican Stereotype and he'd be on a bobsled team.

Rashid is shirtless... and lost his scouter. He still looks like Rashid, so there's not much to talk about.

Juri, well, I could say the same thing as Rashid, but she's still supposed to have the freaky eye (feng shui engine) hidden by her bangs. Spider tattoo is new.

Ed looks like an Abercrombie and Fitch model. Fits on the fighting game because shirtless fighter... at least he's over his wannabe Good Bison phase... but not his Tekken character phase.

Akuma Matata has evolved into a more Kraven the Hunter look. It's crap!

Luke... I don't give a damn about Luke... but does he still have the stupid stars on his hair?

Now here come the Newcomers! My Japanese skills are very low. But thanks to Duolingo, I think I can attempt to translate the names... they might be wrong though.

Marida Marisa or Marissa: Guess who will be having tons of futanari artwork on those areas of the Internet... This possible kickboxing or pankration She-gief hailing from Pizza and Pasta land, might cause death by Snu-snu or if we believe the R34 art that WILL COME, it's going to be the sequoia in her pants. Move over Poison, there's a new Futa in town. Why is she wearing Ancient gladiatorial gear with modern kickboxing attire? Capcom...

Jamie, well, he looks OK. A bit of a Yun/Yang rip-off, but he's supposed to be a Yin/Yang wannabe, so it fits. But the drunken boxing gimmick sounds more like a Tekken thing than a Street Fighter thing.

France's Mimi, looks like a Karateka Poodle... or is it Tae Kwon Do Poodle... in any case French Poodle vibes are strong in this one. She could fit well in Tekken.

Mexico's Riri, Lili, Lily, Lilly... it's hard to decipher L sounds in a language that has no L... hence the whole La-Li-Lu-Le-Lo business from Kojima, since Japan has no L, making the Patriots unmentionable. Well, the Mexican native American looks like Talim had sex with Pocahontas and Capcom tried to be a bit more sensitive to Native Americans, than they did with T. Hawk... she could fit in well in a Tekken game.

What in Emo Santa's name is this JP dude? Is he the new G? His Outfit is more Ken than Ken's.

Kimberly, kinda reminds me of Roll Caskett. What is it with her weird grabby hands at the end of her tentacle-like braids... R34 might have some fun with these depending on her gameplay.

A.K.I. well, she reminds me a bit of Lady Deathstrike... or Hsienko...

I need to see the new characters in action to judge a bit more. Hopefully, classic outfits will not be hidden behind paywalls. The only thong I'm disappointed is that a lot of SFV females are MIA, no Alpha, SF3, or Final Fight folks in sight, a double bummer since a lot of the game is in Metro City...