Why isn't Mattel pushing for a MOTU videogame?

Even if it's based on the weird CGI Netflix series. I mean a real game, not the Roblox lazy bullshit. The last "real game" we got was a mobile game. The infamous Tappers of Grayskull... for years fans have clamored for a REAL MOTU Game and the only thing we've gotten are fan games using the Beats of rage engine (now known as OPENBOR...), but those are fan games with ZERO budget and operating on a nebulous zone between homebrew and piracy.

I know, I know... Mattel loves to quarter ass stuff when half-assing it is enough. But still it pisses me off that TMNT gets such a glorious game like Shredder's revenge and He-Man gets fucking Roblox... as much as I shit on Fork Knife, they got GI Joe...  like Nickelodeon puts effort on working with a company that understands the product and makes a love letter to TMNT fans from both the vintage cartoon AND vintage games, which was sold at a VERY REASONABLE PRICE... Meanwhile, Mattel: what do kids like this days? Roblox... wait is that like Mega Bloks? Free Internet platform where the community makes the games... wait, so we don't have to pay anything and the suckers make the work for us? ROBLOX THE FUCK OUT OF HE-MAN!!! Wait, what do you mean we don't get any money from Roblox HE-MAN!? Eh screw it... This will piss off that guy who had a blog that made that douche Neitlich shit his pants... what was his name again Nasty, Neffy, Lefty's outhouse rants! With his 20 readers, he always made Neitlich look like a bumbling buffoon... wait, what do you mean, he's moved on from MOTU!? WE NEED TO MAKE MORE SHITTY HE-MAN STUFF TO CAPITALIZE ON HIS 20 READERS!! That is 2 times 10!

I love making fun of Mattel being clueless and quarter-assing stuff when they should put an effort. But I would rather be praising Mattel than showcasing their incompetence... the only way I can praise them is if THEY WOULD PUT SOME DAMNED EFFORT IN HAVING HE-MAN RETURN TO THE TOP 3 SPOTS OF ENTERTAINMENT PROPERTIES THAT RULED THE 80S!! 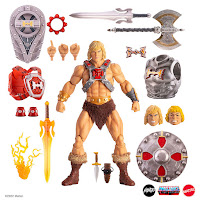 This is the limited edition Deluxe He-Man by Mondo toys. Sure it's on the 1/6 scale and it's $260.00, but Look at all he brings forth. It's a 3 in 1 Figure. If Mattel were to put at least HALF that effort on a "deluxe Masterverse" He-Man, I might be singing praises. Sadly, Mattel would make a million excuses on why they couldn't do something similar for their 7 inch line.

There's a thirst for MOTU media but Mattel is ignoring it, then they wonder how GI Joe, Transformers, TMNT, and Star Wars are doing better than He-Man...