Why Christopher Reeve is the best Superman

Brandon Routh and Henry Cavill are great actors, but their Supermen aren't as good. Out of the 3 main big screen Supermen, the only actor who managed to achieve a close to perfect take on Superman (for the most part) is Reeve... this was in part because he got the better direction and scripts (only counting Superman 1 and 2 for Reeve, since Superman 3 and 4 had awful writing and directing. Then again, pretty much everyone forgets Superman 3 and 4) aside for the memes... 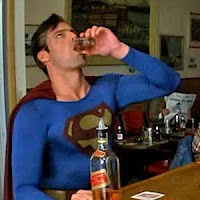