It Came from the Toy Chest... He's Jack Allman!

He appeared Last Saturday but I was only able to take the pics today! Now I'm pissed off!

First things first: Look at the mailer box... It has the 2011 Mumm-Ra Insignia and not the 80s Mumm-Ra insignia! *Nerd Rage!*

So, Jackalman... He's one of the Plun-Dar Mutants and comes from a race of Jackal People. He may be Irish... I had to take a jab at the shillelagh at some point! But if you hate the Irish, he has a Pole Ax... He's also the ONLY villain figure that the super short lived Mattel line will have. I guess this should be Mattycollector's new Anthem.

Let's get to the Review Part of the Review, shall we? 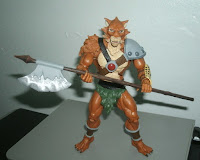 Articulation:
Jackhole Mann has the same Articulation as a MOTUC Figure... But with added wrist and ankle articulation.

The Pauldron obviously restricts some Articulation. So does the left bracer.
4.0

Paint and sculpt:
He's nearly flawless. There's a slight bit of slop on his greaves, but it's barely noticeable from near distances.
The clever reuse of MOTUC Parts with new pieces makes him pop. It's a shame that his neck piece is loose, but Mattel had to save money somehow.
4.5

Accessories:
Note: Mattel sent me a Jackalman with a screwed up left hand. I had to scrape off a lot of flashing to make his left hand move... I SHOULD Send him back, but with Mattycollector closing shop in a month, I don't trust them...

So, he has his shillelagh, Pole Ax, Removable armor, and 2 extra hands.

IN MY CASE a 3.5 due to the busted hand. If my extra left hand had been flawless, he'd get a 4.0 here. The Armor and Neckpiece should have been two separate pieces. That way you could have Jackalman and a semi Generic Jackal warrior by removing JM's armor and repainting the lackey a little bit...

Overall:
MY Jackalman gets a 4.0 as his final score. Had his hand been perfect, he'd be a 4.17, but it is what it is.
The Armor flaw hurts me twice because Nefty-kun would have enjoyed sporting a Shoulder Pauldron similar to that of Cloud Strife... Or cutting the pauldron for Duncan to have a more 200X MAA... Shame that Jackalman is a bit expensive... cause he's great for Generic Beastmen.

Happy Thanksgiving, y'all!
Posted by Nefty at 10:54 AM