The Final Mattel MOTUCs are on Sale Today

The line started with 200X and ended with 200X (and New Adventures) for Mattel. They now pass the baton to Super7.

It was a wild ride, Matteh. I had moments of joy, moments of sadness, moments of anger... (The anger stems mostly from Digital River incompetence and Mattel's own Least amount of Effort Dogma) This is where we part ways, I suppose, since Panthro comes on a sub and unless you do a super clearance sale for Black Friday...

*sigh* will this happen every time I mention Friday?

Now that I see this... Wonder what Patrice Wilson is up to...
OH GOD! That needs a rant of its own!
Back to Matteh. Well, it's pretty much Over... I started with Teela and was able to catch up to pretty much everyone. Goddess, Wun-Dar and Temple of Darkness Sorceress elude me... Well the OG KG eludes me too, but I can manage. This is the closest I've gotten to a complete MOTU Collection and despite the crap that Mattel put us through (with their assbackwards ways or Digital River) we endured, because we love MOTU. Now it's time for Super7 to shine, bring it on!
Right now we don't know if Matty will do a Cyber Week, seeing that they opened an ebay shop available only to continental US. So, Today may have been my Last Order made manually on Matty.... good since it took them like 13 minutes to get started.
Tomorrow will be Super7's Baptism by Fire. In the words of Abridged Barret

Speaking of passing the Baton to Super7, Geek has a badly researched piece on Super7's MOTUC Ultimates. 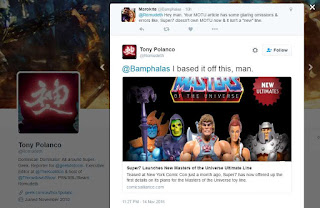 Seriously? No mention of Mattycollector, or that the line has existed for 8 years WITH MODERN SCULPTING MADE BY FOURHORSEMEN STUDIOS but with a more 80s inspired style to contrast their 2002 Hyperstylized look. Piss-Poor research is piss poor. It looks like the dumbass who wrote this just used Super7's email that HAS A MENTION OF MOTU CLASSICS. FFS You put MOTU Classics on Google and it points you to the dying Mattycollector site and other sites and blogs that talk about the line or sell products.

*UPDATE* The writer of that piss-poor article pretty much ripped off an article from Comics Alliance that Actually Mentioned MOTUC being a toyline that Mattel had released during these past few years. And that doesn't excuse his piss poor journalistic skills... Seriously, he's on a blogger level not "Reporter" as he calls himself.