It Came from the Toy Chest: WHY DID YOU SAY THAT NAME!? 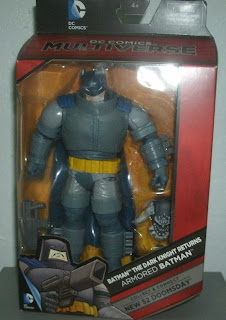 Nah, it's the MOTUC Bodied Armored Batman, which was the Inspiration for Armored Batfleck. Of course I'm talking about the Dark Knight Returns Batman.

The armor is for Fighting Superman. If you're not aware of The Dark Knight Returns, there's an animated movie where Robocop voices Batman... Clip Below. 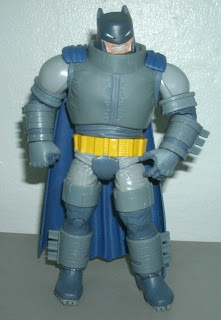 Articulation:
Same as a MOTUC, but due to the sculpt it is limited in some areas (namely elbows, ankles, thighs, and abs) 3.5

Paint and Sculpt:
The sculpt is a bit on the ugly side, but it's faithful to the source material. In a way it's odd seeing baggy body parts on a MOTUC buck. I just wish that the Gun hand had been sculpted to hold the gun better.
There's no visible sloppy paints on my Batman.
4.5 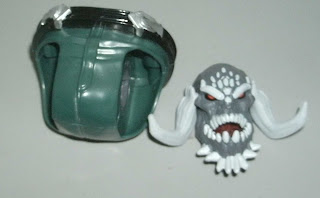 Accessories:
The Gun... You know the thing Batman doesn't use except when he does... Doomsday's head, which is completely compatible with MOTUC bucks and Doomsday's crotch... I knew Batman Loved Dick, but that wasn't the Dick I expected... I'm talking about Grayson, not penis... and if he loves penis, so what? Batman's sexuality won't stop him from serving JUSTICE!! but yeah it's a bit odd that they padded out the wave by tossing in Doomsday's crotch on Batman when it could have come with the Torso and Luthor.
5.0

Overall:
Bats gets a 4.33 as his final score. It's not bad, now all I need is the Joker and I won't have to buy any more Mattel Products... Seeing that MOTUC is now under Super7... 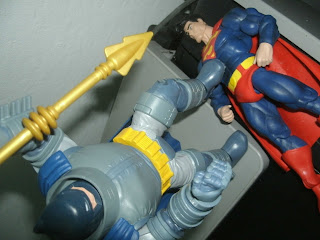