It Came from the Toy Chest: Dickless Robin 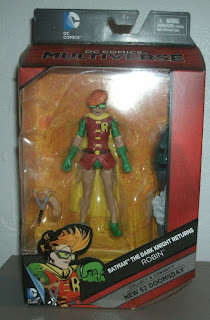 And I don't mean that this Robin lacks a penis... just that it's Robin, but there's NO DICK Grayson in sight...

To be honest, I only bought the Carrie Kelly Robin to pair up with MOTUC Batman. Normally I'm a Dickhe- wait, what do they call fans who only like Dick Grayson as Robin? I don't think that -head would be the correct suffix to add.

So that kinda explains who she is let's talk the toy. 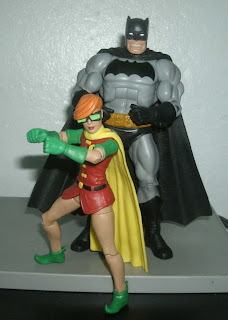 Articulation:
I am VERY underwhelmed with her here.
Mattel is attempting to hide the pegs for articulation points like the elbows and knees, but on Ms. Kelly they are severely limited if I were to compare her with a figure of that size, like say the Thunderkittens. To compensate, Mattel added the DCUC Thigh cut, which looks awkward on her. Since she's on a smaller buck, Mattel has no idea how to make an ab crunch.
3.5 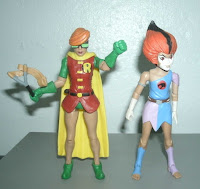 I'm a bit disappointed here. She's got these Shaq-hands that can't grip anything. One is on a fist and the other one can barely hold her slingshot... Then there's her Enigmatic Torso. From some angles, it seems to retain some degree of femininity, but from others she looks a bit mannish... Then again, this is somewhat consistent with the art it is based on. Paintwise, the arms are a bit problematic since the flesh paint seems to be flaking off a bit on some areas. Also, couldn't her head have been a 2 part sculpt with the glasses being translucent green to be more accurate to the art? (I can hear my nemesis screaming Logistics!!)
2.5 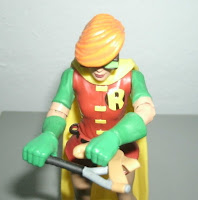 Accessories:
A Doomsday leg that I don't care much about... Not interested in buying Poor Man's Michael Cera and TV Supergirl to complete... and her slingshot.
3.0

Overall:
Ms. Kelly gets an exciting 3.0 as her final score. She's a bit bad on her own, but when you have her WITH Batman is when she shines.
Whether it's a vanilla pose, or a more Action Pose, they complement each other. 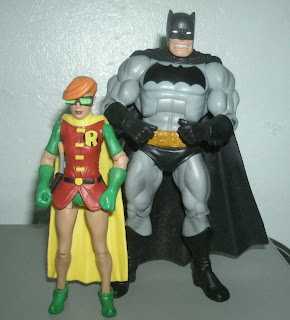