It Came from the Toy Chest: Good thing they are Loyal... Imagine if they were traitors. 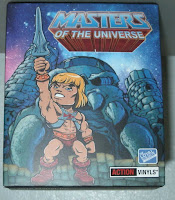 Of course I'm talking about the Loyal Subjects MOTU Mini Figures. Yes, I'm aware I said I wasn't going to buy them, but I saw them in person and thought: Try to get He-Man and Skeletor.
Got 4 Figures one week (about a month ago.) He-Man, Trap Jaw, MEF, Beastman. 3 weeks ago got some extra cash from an odd job... and got 2 MAAs... DAMN!! Last Week or so, got 4 more and Evil Lyn, Trap Jaw, MAA, and He-Man showed up... Guess you're seeing the problem of these figures being Blind Bagged... Yes, I'm getting this out of the way. While I was LUCKY that there was a small discount on them, the figures are normally $15... I mean this is not a $3 pony figure...
So, in that area, The Loyal Subjects are a bunch of Traitors. As far as I know there is no Blindbag Cheat like Hasbro's MLP Blindbags, hence me being stuck with 3 MAAs.

Now that I got my main issue Out of the way let's look at the little buggers. No, I will not make an it came from the Toy-Chest for each of them.

Which is kinda nice for these tiny (overpriced) suckers. Most of them have easily movable joints with a random limb popping off... (Mostly Evil Lyn) The only figure with a stuck joint is MAA on his right foot (Luckily I have a pair of spares in case of breakage). 4.0 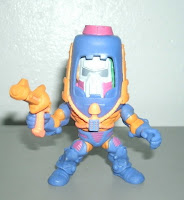 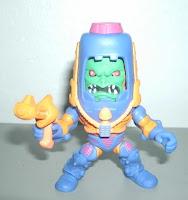 Paint and Sculpt:
The Super Deformed Cutesy style kinda works on them. They are sculpted in a CLASSICIZED FILMATION hybrid. The Figures take CLEAR CUES From Filmation, but have Vintage Toy or Classics Level of details on them. Most of them have nice paintjobs... Beastman has been the worst. his armor was glued on partially and a bit of Red paint chipped off his back. I had to reglue and repaint. He also has a weird strip of beige on his head that isn't supposed to be there.
Other than that they look super Adorkable! 4.5

Accessories:
Each figure has 1-3 accessories. 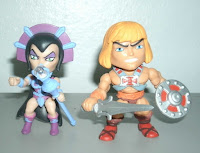 This is where the Collective Review thing would grind to a halt.
But here's the thing:
They have to be on a Case by case basis. Trap Jaw needs 3 Accessories due to his action feature. Man-E-Faces only needs his gun. He-Man is missing his ax, which is a bummer.
3.17 would be the overall score on accessories. (Sounds a bit like cheating, I know)

Overall:
The Final Score for these figures is: 3.89 but since these are $15 Blindbags, I must remove 1.5 points from their score due to Blind Bag BS. which gives us a 2.39 as the TRUE Final Score. I know what you're thinking. Damn, Nefty, why are you so harsh on them!? Because $15 blind bag figures is a tad Ridiculous. If these suckers were $15 each and came in their own blister card or window-boxed, I'd be fine with them. Hell I kinda would be up for some of the more obscure MOTU figures... Imagine Rio Blast or the Mighty Spector...
Maybe they could cross-promote it with the Tappers of Grayskull app... Ooh! A non-blind bag Battlecat would be nice!