Guns and toys: The old problem is new once more

Every now and then, gun issues in the US have repercussions on the toy industry.

This is why Some GI Joe weaponry is getting the "sci-Fi" treatment and in some cases end up looking like Nerf guns. Or like in Robert Muldoon's case, lose the gun and get a taser rod... but nothing is worse than Red Hood, aka Jason Todd, not getting his guns... despite having them in previous releases. 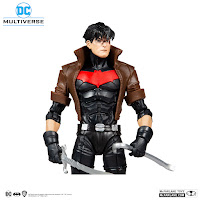 A Blazing sword? Who does Jason Todd think he is? Voltron? Crowbar? Who does he think he is? Gordon Freeman? Or is he bringing it so that the Joker can kick his ass once more? Swords are a Damian Wayne thing not Jason Todd. Jason Todd is the Ex-Robin with the guns.

We're slowly returning to the Spielberg removing the guns from E.T. point. I'm not interested in going into the real world discussions of gun rights vs responsibilities. I'm only interested in talking about toys.

I understand the issues with Life Sized toy guns and the problems they could cause. These would never happen today:

My issue is with Action Figures getting weird Nerf-like guns or go gunless instead of the ones used by the character... I can understand if for example, let's pretend theowner(s) of the design of the Tommy gun, don't want their weapon to be associated with gangsters, so Marvel's Hammerhead can no longer use one. Due to that it would be understandable that in this case Hasbro would not make a Tommy gun, but Hammerhead could still get a submachine gun with a drum magazine that is NOT a Chicago Typewriter. BUT if they got Too sci-Fi, like a Liefeldian Cable Gun, it will NOT make sense on Hammerhead. Catch my drift? The gun must suit the character. Especially when we're dealing with so-called "Adult Collector" lines, with so many online exclusive figures that are not available for "Little Timmy" at retail.

I get not having Realistic Life Sized toy guns. I can respect that, but action figure sized non-fiiring weapons? Aside from being a potential choking hazard, since they do not belong in people's mouths... they can't harm anyone?

This reeks of banal symbolic, yet useless gestures and posturing. Just like the Gun emoji being changed. 🔫 is now "non threatening" because it's neon green and yellow?

How does Roadblock no longer having a realistic looking belt-fed machine gun prevent a curious teenager from appropriating an improperly stored firearm and use it inappropriately? That's exactly the point. It does nothing! It's just the worst kind of slacktivsm that exists. Right now these symbolic gestures benefit no one.

The problem is that the solution to this issue with the toys involves dealing with the Rights vs Responsibilities involving guns. Personally, we should start with educating EVERYONE about gun safety. Even if one never intends to own/use a firearm, having basic safety rules like: treat every weapon as if it was loaded.

Even our trained officials could use some refresher courses. No. This is not some propaganda for either side. I simply believe that education is a great tool to reduce irresponsible gun usage and the damages it can cause. Just like Sex Ed allows teenagers to make informed decisions to prevent STDs and pregnancies. A

I'm aware that it kinda sounds hypocritical because I'm trying to defend guns in pop culture and fiction while advocating for education in the real world. Fiction is fiction and in that area I tend to defend all weapons, blades, firearms, nukes, biochemical, blunt melee types, ect. But in the real world, I believe in education and discipline will yield more responsible owners... and I'll leave it at that, because I've strayed far too much from the toys, which is why I'm rambling in the first place.

I get that the companies are trying to "not glorify guns to children" but it's ridiculous to alter the guns beyond recognition or eliminate them from products aimed at the "Adult Collector". Because kids are the ones totally buying the human figures of a 30 year old movie... bitch please, the kids are buying the Motherfucking T-Rex, Not John Hammond!!