It came from the Toy Chest: Cowabunga Dudes!! 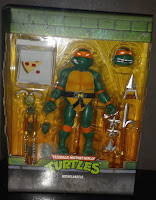 Best Turtle is in the House, yo! But I guess you already knew that since he featured in the April and Metalhead reviews. Of course I'm talking about Michelangelo aka the party dude.
Usually he's known as the youngest turtle, the artist, the one who is holding back his own potential, the goofball. In the Neftyverse, he's the horndog as well and thanks to this Oprah interview for the Coming out of their Shells tour, Raph and Mikey wanting to have an interspecies relationship with April IS CANON!
But enough talk, dudes! Let's review the most radical Turtle!
Articulation
Like the previous 2 Turtles and the upcoming Donatello, Michelangelo shares the same body. The only real differences are heads and belts. My Mikey is a little bit wobbly below the belt.
4.0

Paint and sculpt
The sculpting on this figure is really great especially the new parts in comparison to his vintage counterpart. Everything that I've said on Leonardo and Raphael in this area applies to Michelangelo as well. Sadly Super 7 started to cut corners on this wave and the paint applications Michelangelo are somewhat lacking. I fixed his belt with a little silver paint. Sadly the orange on his vintage head bled a little bit onto the face.
4.5

Accessories
Like previous Turtles he comes with plenty of accessories, but I have a couple of complaints... Nefty complaining? What else is new?
Michelangelo has a pizza box with a slice of pizza that cannot be removed from the box. The one Turtle with Crippling Pizza Addiction CANNOT TAKE THE SLICE FROM THE BOX!!
He has the grappling hook. Like the SH FIGUARTS Mikey, the Grappling hook has a REALLY SHORT ROPE. The Bendy wire holding Michelangelo to the tray is far longer than the rope that Super7 gave him. I had bought some black twine to tie to the grappling hook but my cat got to it before I could do anything and now my cat is pooping twine...
2 pairs of nunchucks
Extra head
2 shuriken
1 kama
1 pushknife
1 grappling hook
1 pizza box from Hell
1 weapons rack vintage sprue tree
6 extra hands
Aside my issues with the grappling hook and a pizza box there isn't much to complain about Michelangelo. Sure, some might point out the lack of communicator, but chances are that I won't display the communicators... until I can make that dream sewer diorama that hasn't left the planning stage due to lack of time and space. I still haven't reviewed Snake Mountain yet... mostly out of fear...
But back to Mikey. There are tons of things they could have added to Michelangelo, but what they added is the bare minimum to have a decent Michelangelo figure...
5.0

Overall
Michelangelo gets a 4.5 as his final score. Paint and articulation issues where what hurt him in the long run. Hopefully the second of Michelangelo that I have coming will not have paint issues on the face so I can swap heads. And since I know you will ask the second set is to take the mother heads and use them as placeholders for the 2003 Turtles. Yes the pads and belts will be painted brown.
This wave was OK, but the cutting corners hurt it a bit more than expected. This worries me, as the items keep going on in price and in many cases not getting enough value.
Posted by Nefty at 11:46 PM