It's no secret that I hated Noelle Stevenson's adaptation of She-Ra, mostly because it strayed too far from She-Ra for the sake of promoting a faux diversity and "making the show gay" for the sake of "being gay". But the biggest sin was making it "generic". You can literally scrub off all the Mattel references and the show can still work.
Seems that Mattel said: "Hold muh Beer!" and they made This New He-Man... If you hated Kevin Smith and Revelation, this will make that THE NEXT BEST HE-MAN SHOW AFTER 200X.
Teela is now the "Sorceress" and has been recolored... and out of all the the Non-white races they chose... Black. Seriously, aren't there OTHER Races that they could've used for Diversity? Again, why not make Clamp Champ part of the core team if they needed someone who is black?
But at least they're not Genderswapping characters like Ram Man... wait it's Ram Ma'am now?Yes, Ram Man is now a tennage blue haired girl.

Funny thing is that this COULD BE a good show... if it was called The Adventures of Technoking Arthur and the Knights of Mechamelot. As a MOTU show, well...
This... THING... is NOT MOTU. It's Max Steel with a MOTU inspired Fortnite skin. Right now, this is making The New Adventures of He-Man seem like a Masterpiece. I shall watch, because:
"YoU sHoUlDn'T jUdGe A bOoK bY iTs CoVeR" and will comment fairly, as I always do... under the veil of snark and condescension.
Of course, the apologetic brigade is in full force screaming:
"It'S nOt FoR yOu!" or "It'S fOr KiDs!" as if that justifies laziness and mediocrity 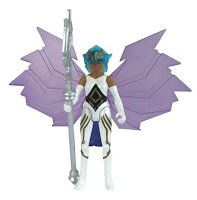 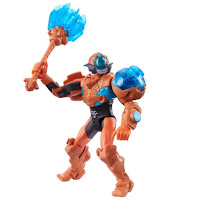 Even the toys exude laziness and mediocrity.
These are a step down from Origins...
Posted by Nefty at 3:41 PM